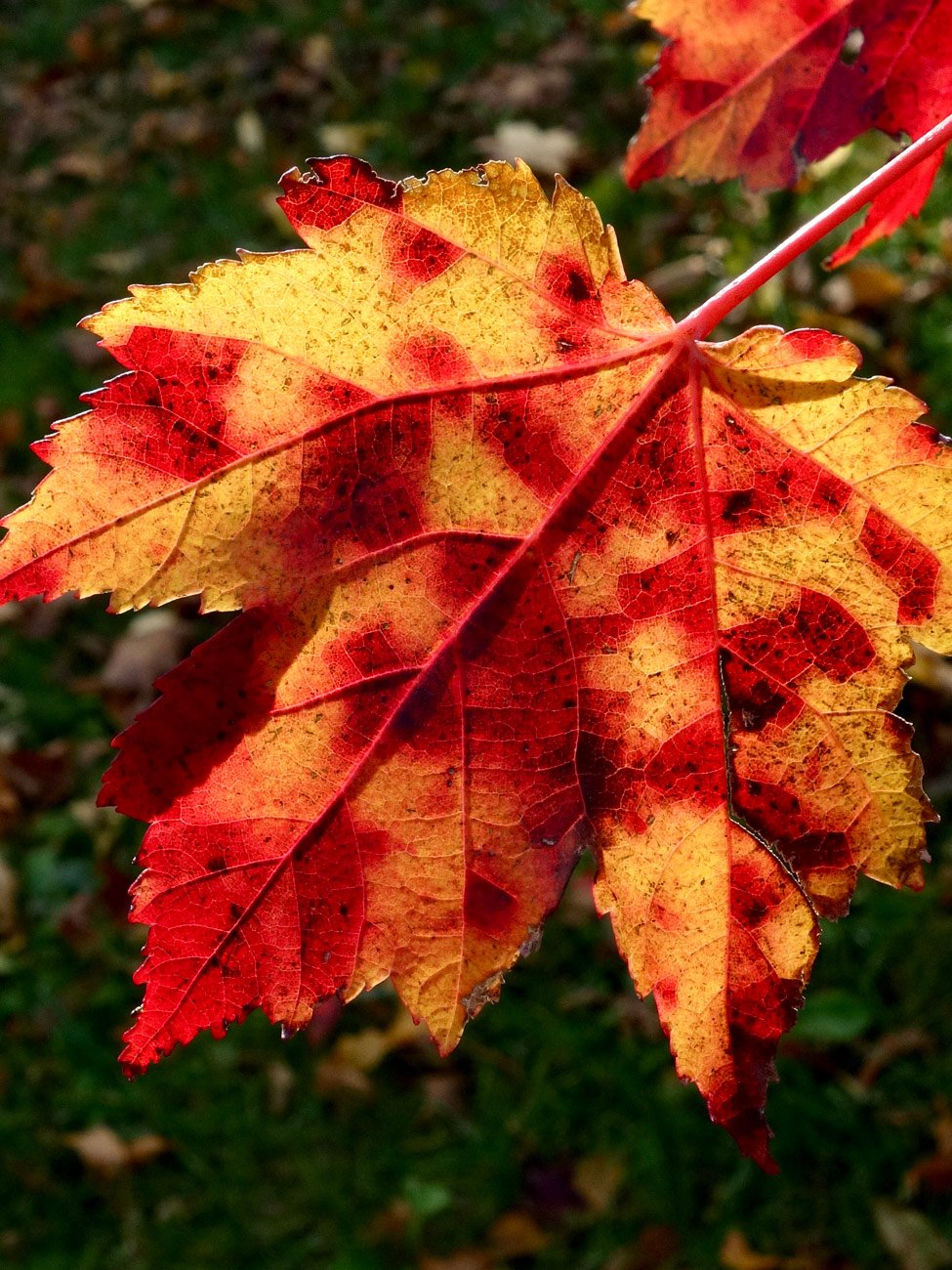 This tree, Acer rubrum ‘Schlesingeri,’ was brought to the Arboretum in 1888 by founding director Charles Sprague Sargent. In spring, the red maple’s green leaves mix with the evergreen leaves of the euonymus vine climbing up its trunk. By late summer and fall, the maple’s leaves have turned a vivid red, earlier than those of other trees. In winter, the tree’s grooved, aged trunk comes into view.

Listen to the audio segment below for the story of how this tree came to the Arboretum.

Arboretum Director William (Ned) Friedman loves the ‘Schlesingeri’ maple. Hear him talk about this tree and the relationships that are possible between humans and plants at a place like the Arboretum.

This red maple and its attendant euonymus—the large vine climbing up the tree’s trunk—illustrate an important fact about this landscape—that all of the trees at the Arnold Arboretum of Harvard University have an origin story.

The tall red maple is from just a mile away. The Arboretum’s founding director, Charles Sprague Sargent, first noticed the red maple in his neighbor’s yard in nearby Brookline. Sargent noted that the tree’s leaves turned red in the fall much earlier than usual. Interested in such an early-turning red maple, Sargent acquired a scion of the tree and brought it to the Arboretum in 1888.

The large green plant in front of the maple is called euonymus. Native to East Asia, this Arboretum specimen was planted in 1930.

These two plants, standing together, illustrate the Arboretum’s mission to cultivate and steward all of the woody plants—trees, vines, and shrubs—that can survive in Boston’s climate.

Some of the plants in this landscape came from right around the corner. Others were collected in remote valleys and mountainsides around the world. Each of them has a story to tell.

So, when I look at this red maple, one of the wonderful things is, it’s almost one of the first things to greet you when you come in our main gate from the outside, the city, into the Arboretum. And it sits there sort of as this grand entry point. It started out quite small. It was a propagated clonally because it was this unusual sort of biology and genetics that made it turn red early. And so someone had to take a cutting and actually grafted onto a rootstock.

And so it started out about the size of a pencil in terms of its diameter. But right now, of course, a long time later, it’s a grand tree, and I think it really speaks to the history of the institution. When you come in this gate, the first thing that I like to think people can begin to understand about the Arnold Arboretum is that each and every one of our 16,000 living accessions has a history. It has a story behind it—it’s special.

It’s a really interesting question, what cues plants pick up to begin to turn color and drop their leaves. Our Arboretum is really comprised of two kinds of woody plants: those that are deciduous on an annual basis and go through the winter without leaves, and those that are what we would call evergreen. And you can think of a lot of conifers being evergreen, although we have plenty of flowering plants, woody flowering plants, that are also evergreen. Some of our hollies are evergreen, for example.

But when you have to learn to read the cues, if you are deciduous, it’s really important that you’re reading day length, that you’re reading temperature, a variety of things. But as you can imagine, just like any two people have slightly different genetics and might react to the environment in slightly different ways, every tree is a little bit different in how it reads the environmental factors around it, the conditions. It’s just that in some cases, every so often you get a bit of an extremity, and this is sort of on a curve—if you think of a bell shaped curve of most red maples turning red about the same time—imagine the tail of that curve up early, and there’s the sort of extreme 0.1% of trees out there in the world that really have the genetics that just say, they’ve read the environment and their biology says, “Let’s get going earlier.” So, to me, it’s a little bit of a reminder of this wonderful complex interaction between deciduous woody plants and the environment on an annual basis. They read the environment, they get rid of their leaves before it’s too late, they take the nutrients back up before they drop their leaves. Colors are magnificent, and then they’re on the ground.

So one of the interesting things about this red maple, Acer rubrum… in New England we’re certainly accustomed to thinking about red maples being part of our natural set of ecosystems. You think also of silver maples, and maybe sugar maples. And one of the things that I think a lot of people in New England might assume is that they’re just a small number of maple species out there in the world based on our own experience. But, in fact, this red maple, common as it is around New England—and it is a very common plant, it likes wetlands—is really something that you might want to think about in the context of where maples live around the world.

And again, this is what the Arnold Arboretum does so well. It takes us beyond our very local perspective with our collections that are from Asia and from Europe, as well as all across North America, and it gives us a broader sense of what a maple is. And in this case, the maple collection of the Arnold Arboretum is right here, around 200 yards away, on your left, and this maple collection gives you a sense of how diverse maples are. And we think there are about 120 or 130 species of maples in the world, and we have 70 species of maple trees right here at the Arnold Arboretum. So if you think maples are just reds and silvers and sugars, you’re going to be very surprised when you get down the path a little bit and can walk around all kinds of maple species that will broaden your sense of what it means to be a maple tree.