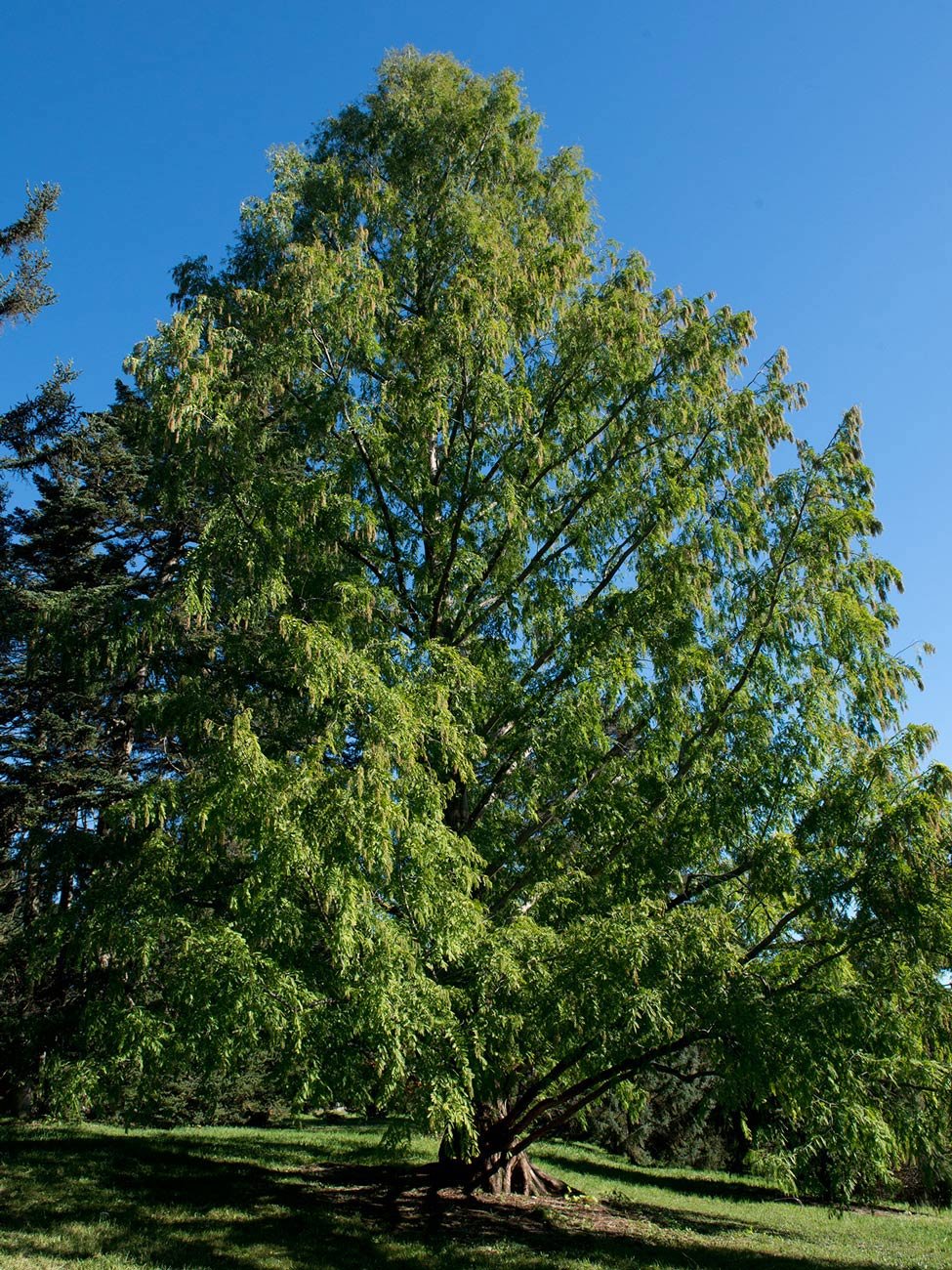 Click below to learn about the dawn redwood’s introduction to the United States.

Click below to hear Arboretum Associate Director of External Relations and Communications Jon Hetman speak about why the dawn redwood has been featured in the Arboretum logo for over 20 years.

In 1998, the Arboretum’s magazine, Arnoldia, named the dawn redwood the “tree of the century.” You may recognize the tree from the Arboretum’s logo, where it has been featured since 1995. The tree symbolizes the Arboretum’s missions of international conservation, education, and research.

In the early 1940s, the genus Metasequoia was known only from the fossil record. Rocks containing the imprints of the dawn redwood’s characteristic needle pattern had been found in North America, Europe, and East Asia.

Then, a forester, Zhan Wang took samples from a mysterious stand of trees deep in a valley in the Hubei Province of central China. At the foot of the oldest tree were a collection of votives—community members had been leaving offerings under the branches for decades.

Over the next several years, Wang worked with colleagues to coordinate collecting expeditions and taxonomic identification of the trees. One of these colleagues was Hsen Hsu Hu, a prominent Professor who was the first person from China to receive a doctorate in botany from Harvard University. In 1946, Hu and another professor announced the discovery that Metasequoia had not gone extinct after all. It was alive and well and living in western Hubei Province.

The discovery of a “living fossil” made international headlines. Researchers and scientists rushed to see the trees for themselves. Elmer Merrill, director of the Arboretum from 1935 to 1946, funded a collecting trip in China to bring back seed.

The dawn redwoods planted at the Arboretum—including the one before you—are the first of their kind to grow in North America in over two million years. The Arboretum distributed over a kilogram of the tiny, lentil-sized seeds to arboreta and botanic gardens across the world, playing a crucial role in the tree’s international reinstatement and conservation.

My name is Jon Hetman, and I am the Associate Director of External Relations and Communications at the Arnold Arboretum.

I think there are a lot of different trees that we could’ve used to symbolize the Arboretum because, after 150 years, there are many, many plants that we have introduced and that we’ve made famous, but the dawn redwood stands out, I think, also just because of its shape. It has a majesty to it and I think, when you are around a dawn redwood, you really get captivated by it, just particularly its beautiful bark, its wonderful, feathery leaves. It looks absolutely beautiful in the fall before the leaves drop.

And the other thing that’s just wonderful about it is that it’s a survivor. This is a tree that should not be here at all, like the ginkgo, but it’s amazing that these trees have survived the test of time, and they have so many stories to tell us.

The dawn redwood near the Arborway Gate, really has pride of place. It’s quite near a grove of Metasequoia, and all of these trees were planted from that first shipment of seed that came over from China, and so they really speak to the Arboretum’s history as soon as you walk into the Arboretum.

When I came to the Arboretum, I didn’t know anything about plants, other than how to grow a tomato, or how to appreciate a rose in the garden. It’s been an education for me, coming to work every day and seeing plants as they go through their various stages of development, and it’s really magical. It really gives you an appreciation for the world we live in, for natural systems, and for institutions like the Arboretum that bring all of this sort of thing to our attention. And so, having been here for 20 years, it only could’ve come about because I really believe in what the Arboretum does, and it gets me excited to be a part of that every day.