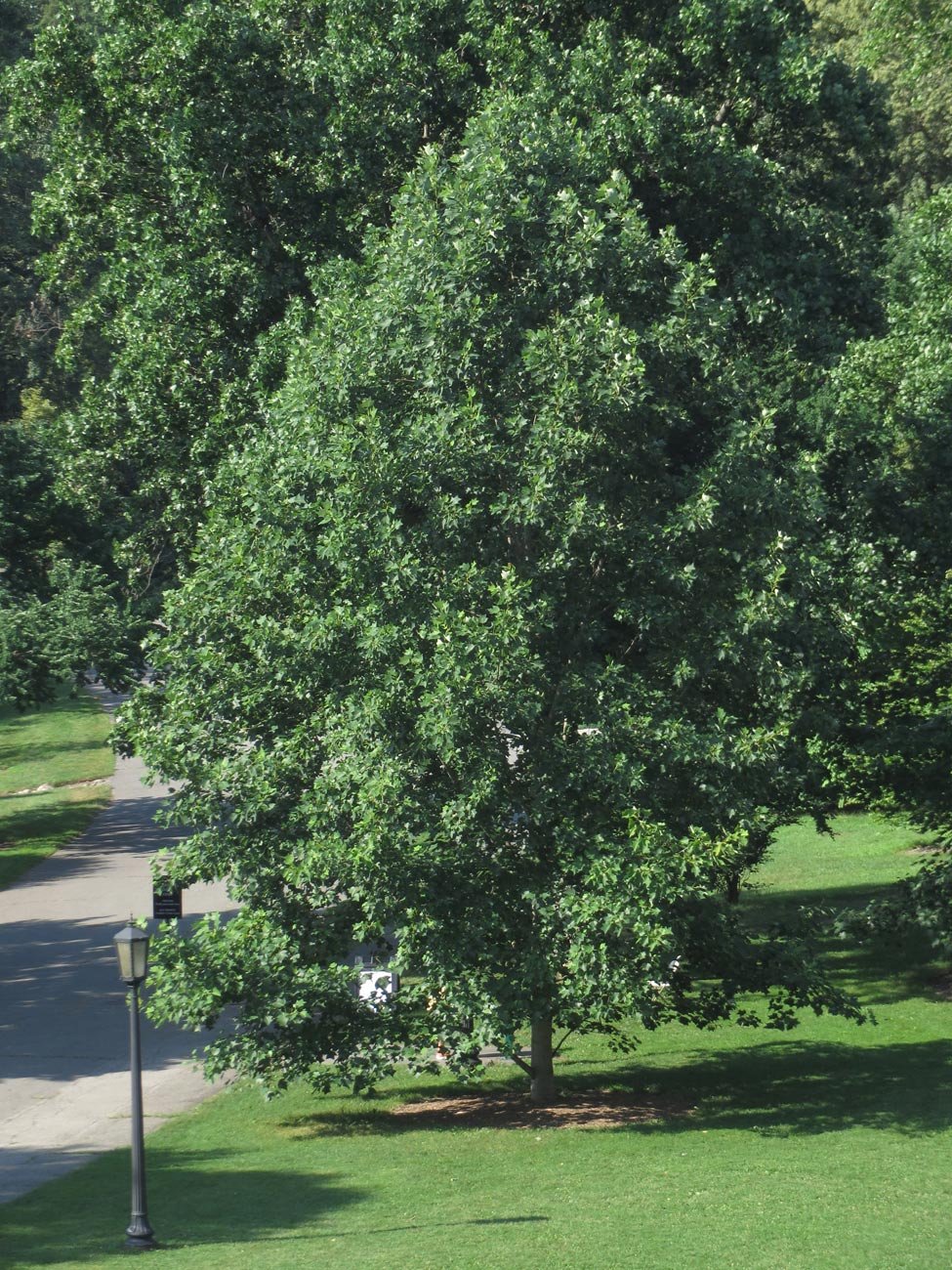 The genus Liriodendron—tulip tree—includes two species: L. tulipifera, common in eastern North America, and L. chinense, found in central and southern China. This tree, called Liriodendron tulipifera × chinense, is a hybrid of the two species. In spring, the tulip tree produces its uniquely shaped leaves. By summer, the yellow-orange, tulip-shaped flowers have appeared. In fall, the leaves blaze yellow and the flowers have developed into upright, cone-like fruit that remain on the branches throughout the winter.

Listen below to hear the story of two species of tulip tree that spent millions of years thousands of miles apart.

Sean Halloran works in the Arboretum’s greenhouses as the Plant Propagator. Hear about his work in the audio segment below.

If you position yourself facing this Liriodendron tulipifera × chinense hybrid with the Hunnewell Visitor Center behind you and Meadow Road to your left, you will see specimens of the two species that were hybridized to create this tulip tree.

To the left of the hybrid, just beyond the water fountain, is the towering Liriodendron tulipifera, which has stood in that spot since 1894. This is the species that grows in eastern North America, the tallest deciduous tree east of the Mississippi River. It has been used for centuries to create canoes and furniture.

To the right is the Liriodendron chinense, the species native to China. This tree is slightly smaller, and endangered in China due to a variety of factors, including the desirability of its timber.

The differences between the trees—other than their size—are subtle. The Liriodendron tulipifera to the left produces flowers with bright orange splotches, while the Liriodendron chinense to the right grows leaves that are more deeply bifurcated.

What you see before you is a reunion of two species that have spent the past twelve million years thousands of miles apart. The two trees share a common ancestor, one that grew when the continents were connected millions of years ago. As glaciers melted, sea levels rose and fell, and the shores of what are now North America and Asia emerged. On the now-separate landmasses, two distinct species of tulip trees developed.

After all of that time, the American and Chinese species were still similar enough that scientists in North Carolina were able to cross them to create this hybrid, which was a gift to the Arboretum in 1981.

Today, the two parents and the hybrid stand together in the Arboretum’s landscape, testament to the similarities between the climates of East Asia and North America.

My name is Sean Halloran. I’m the Plant Propagator at the Arnold Arboretum.

My role at the Arnold Arboretum is Plant Propagator. And so, very simply, that means that we make more plants. That’s a very simplified version of it. But, essentially, we are growing plants from seeds, cuttings, grafts, layers, things that occur naturally in the collections. But all these different types of plant propagules we are cultivating in the greenhouses and the nursery space that exists here.

When we first receive seeds from international and domestic locations, we are receiving them and we’re starting a paperwork chain that will be with us forever. So it’s very important that we document everything, where these seeds came from, who sent them to us, what the provenance is—or, where, exactly, they were collected or where they came from, down to the side of a creek in a certain county, in a certain town, and a certain state or province, and so on. So, that’s the first step, all that documentation.

And then we want to immediately get these seeds into some kind of treatment so that we can germinate them and they can become trees out in the landscape. Germination is different for every species. And so, we keep a very vast collection of propagation information, about each species and each accession that we bring in. So it really does vary dramatically across genera. But even within genera—even within these larger groups of plants—it does vary quite a bit across species.

There’re a lot of surprising things about what we do. I think what we do is not maybe so easily understood. Probably the documentation is the most surprising to a lot of people. That we have these cards that are… We have this information that’s 150 years old. And that this kind of information guides decisions that we make today. So I think for me, like if I was an outsider, that would be one of the things that I would be most amazed at. We’re not only looking in the scientific literature, but we’re also looking internally. To make decisions about how to germinate seeds, or how to take cuttings, or how to graft these trees. So I think the documentation is what can be the most surprising for people.