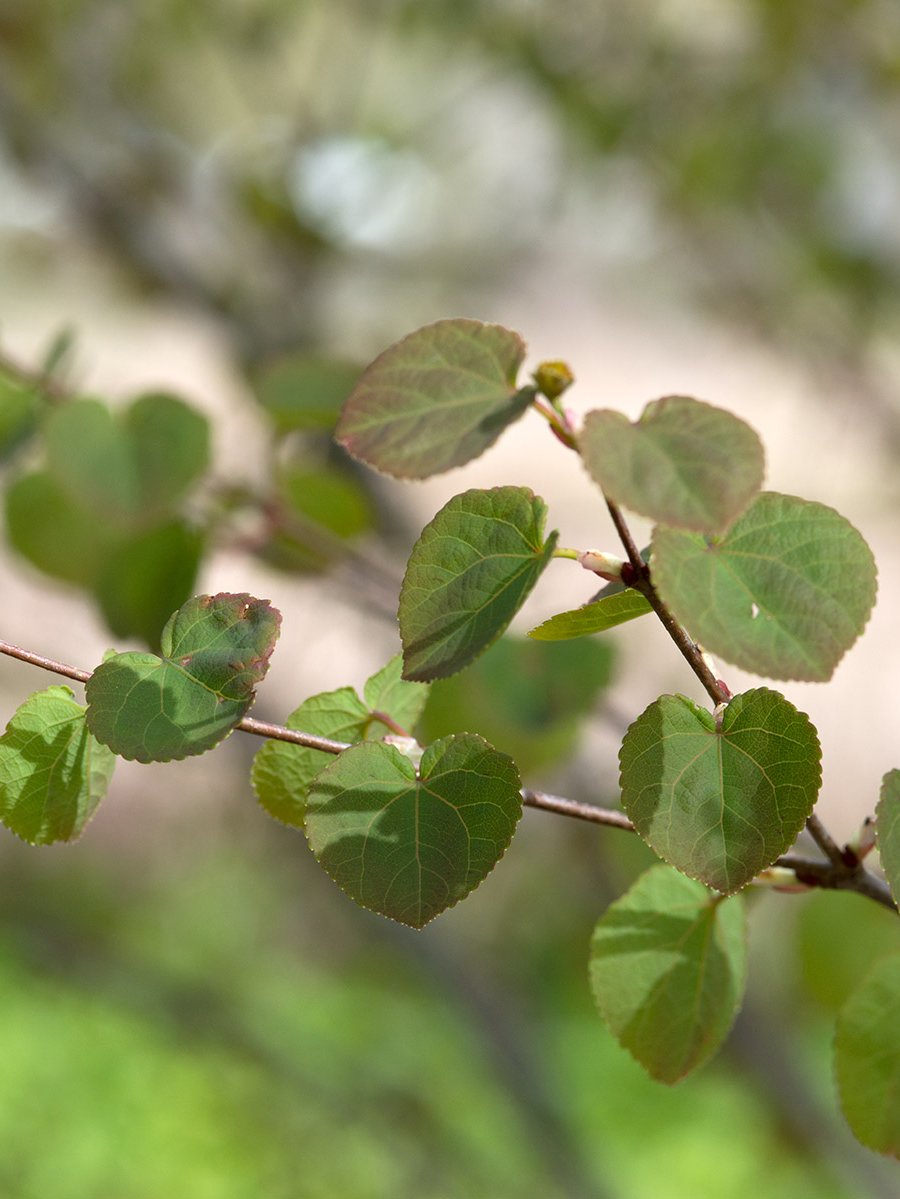 Native to Japan and China, katsura has distinct male and female trees. Each tree flowers in spring (female trees grow red flowers, and male trees grow yellow flowers). The heart-shaped leaves of both trees transition colors from purple-green in summer to yellow in fall, when they emit a sweet, cotton candy-like smell. In winter, after the leaves have dropped, the distinctive seed pods on the female trees take center stage.

Keeper of the Living Collections Michael Dosmann was there in 2017. Hear his story of restaging the iconic 1910 photograph.

This katsura tree grew from seed collected in Japan in 1877 by William S. Clark, a Massachusetts native who helped found the Sapporo Agricultural College—now Hokkaido University—in Japan. The turn of the 20th century was a time of great scientific and botanic exchange between the temperate regions of East Asia, the United States, and Europe. At this time, the Arboretum began its long tradition of spearheading plant collecting expeditions, sending scientists to China, Japan, and Korea in search of seed.

The Arboretum’s most celebrated plant collector from the early 20th century is Ernest Wilson. Between 1899 and 1922, Wilson spent years on expeditions to countries worldwide, collecting plant material and herbarium vouchers and taking photographs with a large camera. He is responsible for introducing an estimated 2,000 species into Western cultivation.

At the Arboretum, he eventually served as “Keeper,” a title acknowledging his prolific contributions to the plant sciences and profound impact on the Arboretum’s collections.

In 1910, Wilson led an expedition to China. Deep in Sichuan Province, he came upon a katsura with a diameter of 17.5 feet—a massive specimen, and the first Wilson had ever seen with fruit. He memorialized the discovery with a photo, posing his fellow plant collectors in front of the tree for scale.

Over a century later, Arboretum staff recreated the scene at the very same tree. Plant collectors from the Arboretum and several other institutions went to China as part of the North America–China Plant Exploration Consortium—called NACPEC—a joint initiative between botanical institutions across continents to increase biodiversity and conservation of plants. In the intervening years, the tree had flourished as a forest grew in around it, growing 40 feet taller.

Arboretum Keeper of the Living Collections Michael Dosmann and Head of Horticulture Andrew Gapinski posed with Kang Wang of the Beijing Botanical Garden to recreate the photo.

My name is Michael Dosmann. I am the Keeper of the Living Collections.

So in 2017, on a collecting trip with NACPEC—the North America-China Plant Exploration Consortium—to northern Sichuan, I was joined by my colleague Andrew Gapinski from the Arnold Arboretum and from Harvard Magazine, Jonathan Shaw, who is actually the Managing Editor. He was there to do a little bit of exploration with us, and to write an article about the exploration trip. And then from Beijing Botanic Garden we had Kang Wang and then Ms. Jian who is in the curatorial staff, so they joined us from Beijing Botanical Garden, and then Mr. Li, who is a graduate student at the Chengdu Institute of Biology, a person who knew the local flora, but also someone we could provide some training to on how to collect for seeds and germplasm.

So our whole group, we met in Chengdu and then we drove North out near Pingwu to a nature preserve, Xuebaoding Nature Preserve, and our goals were to collect a number of different plant species that were native to the area: a lot of maples, Davidia was on the list—the dove tree—a few hydrangeas, some interesting things that occur in northern Sichuan where they might have a little extra cold hardiness. And so those were our goals for that autumn 2017 trip.

Ernest Henry Wilson collected innumerable seeds, plants, cuttings of things that were introduced into cultivation; tens of thousands of herbarium vouchers that are useful for scientific study; and then photographs—photographs of landscape, photographs of people, and photographs of plants—and those have had amazing staying power, are beautiful look at, they’re extremely well-composed, with great detail.

In 1910, late summer, he had photographed a katsura tree and it was a massive, massive katsura tree, multiple large trunks had been coppiced over and over again, had been cut back 10, 15 feet up every year, probably for fuel wood. And it was a beautiful, beautiful image, and that tree was one that he collected seed off of. He had seen katsura numerous times in China but had never seen any of them in fruit. So it was also important because he photographed the tree and he’d collected seed off of it, the first time he’d ever collected katsura seed in the wild, and he also described it as at the time a different variety of the normally known katsura.

So it was kind of a trifecta, a great photograph of a tree that he collected seed off of, that also ended up being a new taxon, or a new variety, of katsura, so I was really excited that we knew all of that about the tree and that the tree still existed. So wow—what an opportunity to go back and revisit the exact same Wilson tree.

So, that day, we launched ourselves from the ranger station to get to the katsura tree, we knew it was going to be a bit of a day-long adventure. Many of the roads were washed out because of that summer seismic activity and then subsequent rains. So they’d washed out these roads and had collapsed, and so we knew we had about a three- or four-hour hike to get to the katsura trees. Much of it was on roads, although as we were hiking up there, those roads were washed out, and so we were following some yak trails to get around them—the yaks are still using the roads even if the cars and the other people couldn’t—and then eventually uphill through pretty leech-infested, wet, dank, damp soil/plant/rock mashup.

And so we hiked up through there, and thinking back to Wilson’s photograph and in his writings in China, Mother of Gardens, he talked about the area being completely denuded, no forests at all, or heavily grazed by horses, by cows, by other livestock, and then cut down for fuel and timber, and then you saw that photo of the tree basically by itself. So that’s what it was in my search image a little bit. Well we get to this and eventually, they say the tree’s up there, uphill, and there’s no way you could see a few feet in front of your face because of the slope, and then all the brush, in front of us.

So we finally bivouac our way through, and hack our way through, and we get to these trees, and we’d seen a number of katsura trees, large ones on our way, and then we see this, and it was a bit of a religious experience. The trees—they tripled, quadrupled in size. They were ancient, hollowed out. Again, there are these three or four main stems that had grown together and kept growing, and it was phenomenal. It was also a little bizarre because the trees had grown up, they’re quite large at this time, 60, 70 feet, and yet all the other vegetation had too, so, it was very hard to get… you couldn’t step back a hundred feet and get a picture of the entire tree because everything else was in front of you. But it was just… wow. It was a bit of a religious experience to stand 107 years later on the exact same spot where Wilson had stood and posed three of his collectors in front of a tree to photograph, and then we collected seed off of the tree just like he had later that season. So it was uncanny.