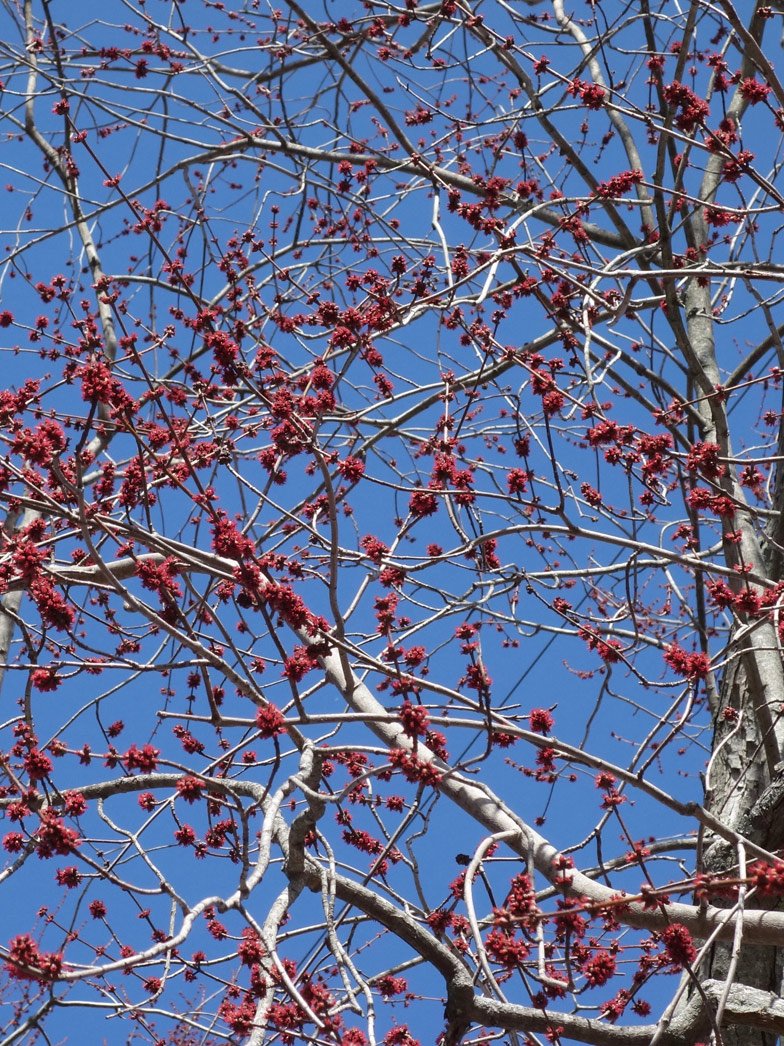 This silver maple was the tallest tree in the Arboretum for decades, until recent storms brought down its largest branches. Brought to the Arboretum in 1881, the tree flowers early in spring, producing small red flowers. By summer, the flowers develop into winged fruits, and the silvery undersides of the leaves shimmer. In fall and winter, check out the peeling silver bark of the trunk.

The silver maple stands amidst the Azalea Border, which was designed by Beatrix Farrand, a trailblazing landscape architect who began her practice at the Arboretum. Learn more about Farrand in the segment below.

Hear Head of the Library and Archives Lisa Pearson talk about influential women in the Arboretum’s history.

The area on either side of this silver maple is called the Azalea Border. It’s a stretch of planting beds highlighting members of the heath family—shrubs that appreciate damp soil—punctuated by large katsura trees, cork trees, and this silver maple.

The Azalea Border was originally designed by Beatrix Farrand, whose remarkable career began at the Arboretum. Farrand was born the year the Arboretum was founded—1872. Early on, she cultivated an interest in horticulture, and began a lifetime of independent study with the Arboretum’s founding director Charles Sprague Sargent. Through Sargent’s support, Farrand developed expertise in landscape design at a time when few women were allowed to become experts. Her lengthy career included design projects at the United States National Cathedral and Yale University, and she was one of the founding members (and the only woman) of the American Society of Landscape Architects.

In 1946, Farrand was appointed as Consultant Landscape Gardener at the Arboretum. Within two months, she had recommendations for a multi-phase project schedule for remodeling the planting beds throughout the landscape. Farrand’s proposals included analyses of soil depletion, visitor patterns, and the effects of the 1938 hurricane.

Her plans included the creation of the Azalea Border. Farrand’s design grouped related plants of the heath family, from low shrubs which prefer wet ground to rhododendrons and blueberries. Farrand worked to maintain Sargent’s original vision, carefully balancing a structured progression of related plants with the overall aesthetics of the vistas.

In 2007, portions of the Azalea Border were remodeled to incorporate new species and more wild-collected species, increasing genetic biodiversity, but adhering to Farrand’s design vision.

My name is Lisa Pearson, and I’m the Head of the Library and Archives at the Arnold Arboretum.

We see people like Alice Eastwood, who was Head of the Herbarium at the California Academy of Sciences. We see people in landscape design designing gardens like Gertrude Jekyll over in England. Here in New England, we have people like Beatrix Jones Farrand, who was a notable landscape designer. She had public landscapes that she designed, such as at Yale University, and what were then private landscapes at Dumbarton Oaks—which today is part of Harvard University—and she designed our own Azalea Border here in the late 1940s, early 1950s. She was a protege of Charles Sprague Sargent. She studied with him, and learned from him, and then went forth and designed lovely landscapes.

Other women that were involved with the Arboretum were people like Susan Delano McKelvey. She came in the 1910s. She came up to Boston and she presented herself to Charles Sprague Sargent and said, ‘I would like to learn from you.’ And he immediately set her to work cleaning pots in the greenhouse. Washing pots! He often did things like that to young acolytes who would be interested in trying to work for him.

For someone like McKelvey, he told her to choose a plant and then go and study it. And the plant that she chose was the lilac, the Syringa. And she, in her studies, ended up producing a monograph that is easily two inches thick, full of information about lilacs, about all the species and different varieties, that is still a recognized source, and used today by botanists.

As well as being a place of education for American women, there have even been women from China who have come and studied at the Arnold Arboretum as part of their work. The first was a woman named Luetta Chen who came in the 1940s and was, I believe, the first female awardee of a doctorate from China at Harvard University.

She was a then later followed by Shiu-Ying Hu, who came in the 1940s, and studied here at the Arboretum, received a doctorate degree and then stayed on and worked on the Flora of China Project here. After China closed to the West in 1949, as part of the Chinese Revolution, she was still here, and provided a conduit whereby Western works of botany could be gotten to Chinese botanists.

She was among the earlier people to get back into China, once it opened again to the West in the 1970s, and she ended up living to age, I believe, 104. I had the pleasure of meeting her around the time of her 100th birthday. She was still quite sharp, and had quite a sparkle in her eye, and it was a great honor for me to make her acquaintance.

The library had a female librarian who worked here in the library from 1909 through 1939. Her name was Ethelyn Tucker and she published the first full catalog of our library holdings. She published that, actually, in three volumes. The first coming out in, I believe, 1914. This was a major work. It again is a book easily about two inches thick, and lists all of our holdings. She, later on, was succeeded by Lazella Schwarten, who was librarian here for about 20 years. She retired, I believe, in the 1960s. And so we have had a number of strong ladies who have headed our library.