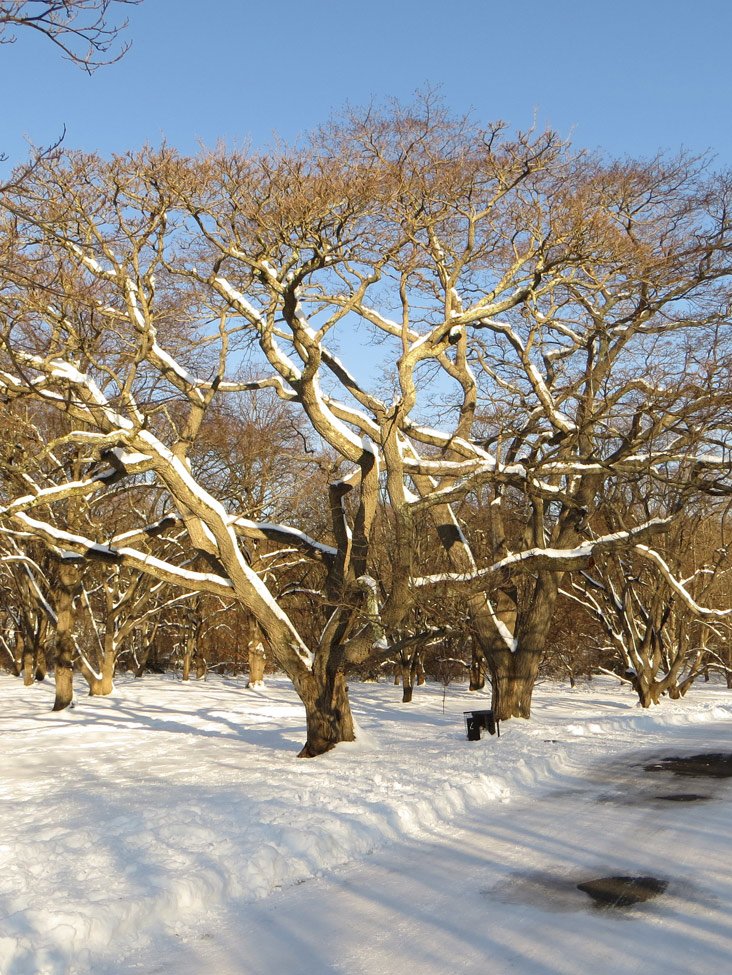 The name “cork tree” is a bit of a misnomer—contrary to the spongy appearance of their bark, so-called “cork trees” like this one aren’t the source of the cork found in wine stoppers. (That’s the cork oak.) In spring and summer, this cork tree grows pointy green leaves. Its neighbors, which are female, also grow pea-sized green fruits, which blacken in the fall. In winter, the trees’ low-spreading branches can be admired.

This tree, and a few of its neighbors, grew from seed collected by the John Jack, the Arboretum’s first public educator. Hear his story below.

The seed for this tree was collected in Japan by John Jack, the Arboretum’s first public educator.

Jack came to the Arboretum in 1886 when he was 25 years old. He asked Arboretum founding director Charles Sprague Sargent for a job, hoping, as he later put it, to “get further knowledge of trees and at the same time earn a little money for incidental expenses.”

Sargent hired him to work on the grounds. Within five years, Jack was acting as curatorial assistant, and launching the Arboretum’s first roster of educational programming.

Over the next several decades, Jack led hundreds of students around the Arboretum. Visitors of all ages came to learn from his biweekly “field study” classes. A Boston Globe article from 1903 described the lively classes as “a party of 40 or 50 men and women examining the leaves and buds of the trees.”

Jack also worked extensively with university students from Harvard and the Massachusetts Institute of Technology, and visiting botany students from East Asia. In 1905, when Jack embarked on a six-month trip to Japan, Korea, and China, he visited with students he’d known when they studied at Harvard. Jack returned to the Arboretum with lots of seeds, including those of the cork tree before you.

Education is still a cornerstone of the Arboretum’s mission. From storywalks for children to propagation workshops for avid gardeners, the Arboretum offers programming for all learners.

My name is Pam Thompson, and I am the Manager of Adult Education.

We offer children’s Field Study programs primarily to City of Boston students. We have a Visitor Center full of information and guidance, and we offer adult classes and lectures, which is what I’m responsible for.

The lectures that I offer include our Director’s Lecture Series, with special guests from across the country and around the world coming to talk on topical subjects regarding the climate and the environment. We offer Tree Mobs, which are really fun, informal, short notice educational gatherings in the landscape with an expert.

My more regular classes tend to be on subjects of propagation, tree identification, horticulture, botany, and ecology. We do a bit of landscape history and science in general as it intersects with culture and everyday human lives.

The ways people learn about plants have changed over the past 28 or 30 years that I’ve been here. Initially, people learned from books and from Arnold Arboretum experts. Then the advent of how-to shows and videos allowed people to learn some information via television. Now, we have the Internet and webinars as tools for learning; however, I find that people still want to learn person-to-person, getting their hands dirty or watching an arborist prune a shrub up close. I also find that people like to learn as part of a community. A lot of what happens in adult education is social learning and sharing from each other’s experiences.

People love the Arnold Arboretum’s cork trees. The deeply grooved bark calls out to be touched. Their girth is magnificent. So many family portraits have been taken standing in front of these trees. In fact, root compaction from so many visitors led to the demise of one of these grand specimens. In essence, it was loved to death. Though these trees provide food for birds, and are here as a resource to study, they’ve also proven over time to be quite invasive, so I don’t recommend planting these trees. But, they’re here for study.

What’s so beautiful about this area is the dense and low branching canopy. In the summer, it definitely feels cooler under these trees. In the winter, the light from the setting sun plays beautifully through here; the back lighting, the leafless canopy, and making me notice the architectural structure of these trees in the change of the season. I definitely notice it most here every fall, every November and December, as we lose our leaves and we lose our light, it’s in this particular area that I notice that change of season and mark it in my mind.