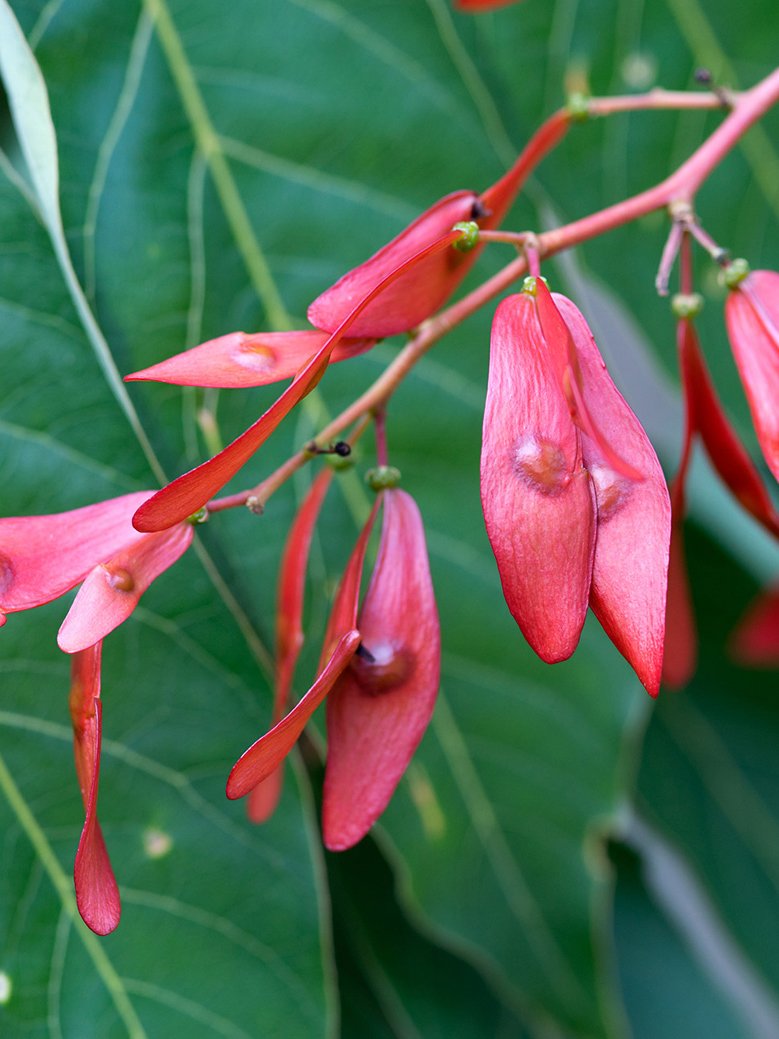 This tree of heaven was collected eight miles away, at the intersection of Interstate 95 and the Massachusetts Turnpike. In spring, the tree leafs out later than most surrounding trees. By summer, it is laden with winged red seeds. The leaves drop in unison after the first fall freeze. In winter, the tree’s gray-green bark stands out.

Feelings about the tree of heaven have changed in the past 200 years. Hear the story of the tree’s initial reception and eventual fall from grace.

Arboretum scientist Peter Del Tredici collected the seed for this tree just eight miles away. He tells the story below.

The so-called “tree of heaven” was introduced to the United States from China in 1784. It was quickly adopted as an ornamental tree that survived well in difficult conditions, and was planted widely across the northeast.

Arboretum founding director Charles Sprague Sargent wrote that tree of heaven was notable “for hardiness and rapidity of growth, for the power to adapt to the dirt and smoke, the dust and drought of cities, for the ability to thrive in the poorest soil, for beauty and for usefulness.”

By the middle of the 19th century, however, opinions had started to turn. The tree’s aggressive growth across North America caused concern. The tree’s ability to resprout from stumps and roots meant it could survive in difficult conditions, and its multitude of winged seeds meant many new trees every year.

Today, tree of heaven grows in the alleyways and pavement cracks of major cities from Canada to Argentina. It served as a central metaphor in Betty Smith’s 1943 novel A Tree Grows in Brooklyn, where she wrote, “No matter where its seed falls, it makes a tree which struggles to reach the sky.”

In 1980, Arboretum staff spotted a tree of heaven with unusually red fruit at the intersection of the Massachusetts Turnpike and Interstate 95, eight miles from this spot. Arboretum scientist Peter Del Tredici, then assistant plant propagator, collected root cuttings from the tree and sprouted them in the greenhouses. In accordance with the Arboretum’s layout of families of related trees, the tree was planted here on Meadow Road.

Within the Arboretum’s diligently-managed landscape, the tree poses little threat. It serves the Arboretum’s mission of showcasing woody plants that survive in this climate, and as a starting point for conversations about invasive species.

My name is Peter Del Tredici, I worked here at the Arboretum for 35 years, and retired in 2014. I am the Senior Research Scientist Emeritus.

1980? Well ... Wow. That’s the year that I started at the Arboretum. I was the Assistant Plant Propagator working under Jack Alexander.

Well, this tree is funny. The Horticulturist at the time, his name was Gary Kohler, and he noticed that ... In the Arboretum, the plants are arranged according to their botanical family, and this particular family, the Simaroubaceae, had a particular location. The ailanthus is part of that family, and it wasn’t in the collection. Yet it’s one of the most common trees growing as a spontaneous plant in the northeast. He said, “We’ve got to have—for the sake of completeness of our collections—we need to have an ailanthus growing on the grounds. We shouldn’t just have an ordinary one. I saw one with beautiful red fruits that was growing right along Interstate 95. You’re in the propagation department, so why don’t you go collect a plant of that?”

So I drove out there and parked along Route 95, right where it crosses the Charles River, and I climbed down over the guard rail and down the slope of the bank of the Charles River, and I found the tree that he was referring to. It did have beautiful, red fruit. I was there in the early fall when the fruit is at its most spectacular coloration, and I had a shovel and dug up half a dozen pieces of the plant and brought them back to the greenhouses and then put them in flats the following spring. They didn’t all grow, but two or three of them grew, and we let them get established in the greenhouse. Once that happened, then we planted them out in the nursery and then they spent another two or three years in the nursery, and then we put them out on the grounds.