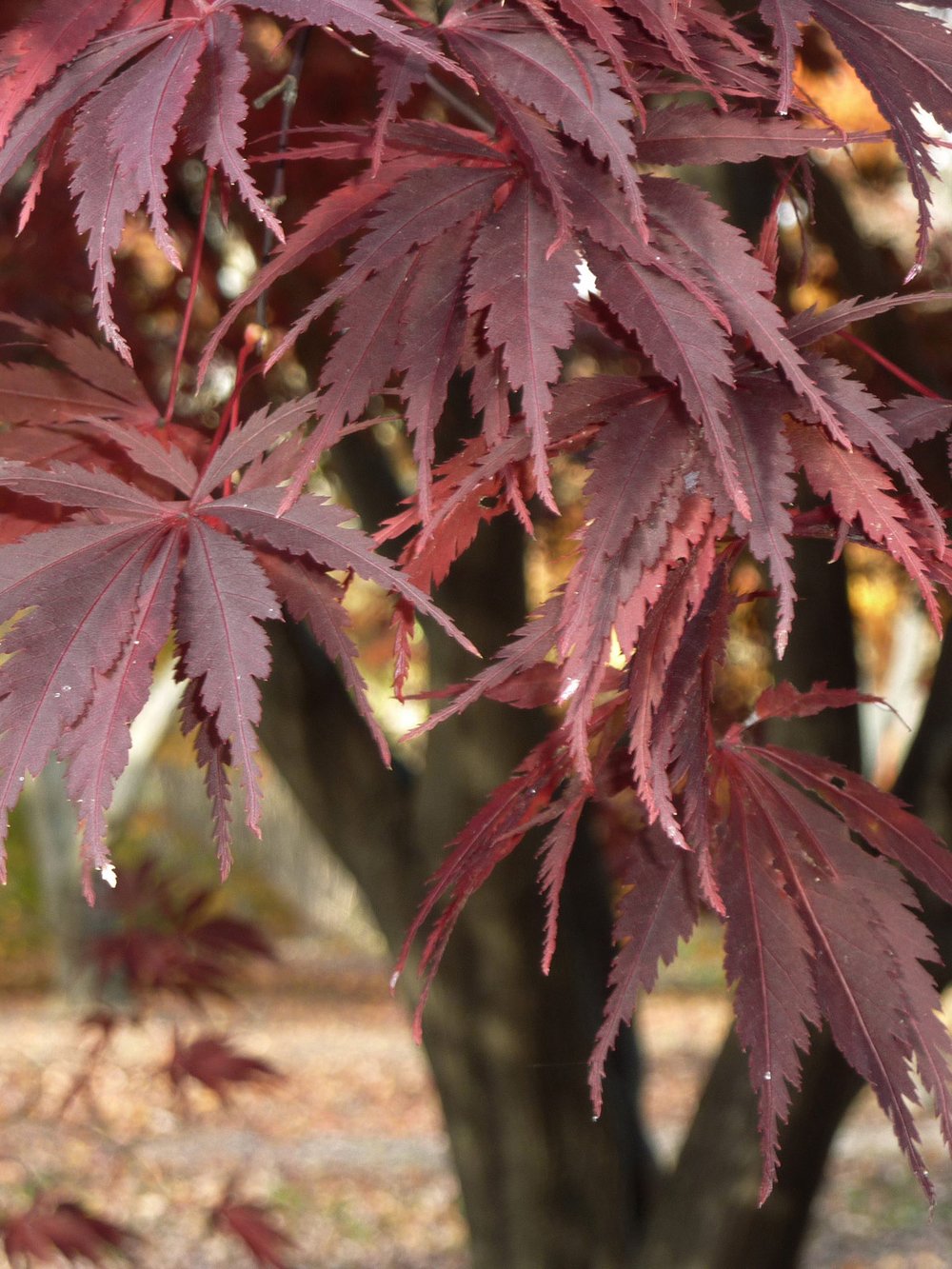 This Japanese maple, brought to the Arboretum in 1958, stands in the heart of the Arboretum’s world-renowned maple collection, a key component of Frederick Law Olmsted’s carefully-designed landscape. In spring, the Japanese maple grows small red-purple flowers. By summer, it has grown red, pointed leaves. The trees winged seeds—called samaras—take flight in the fall. In winter, the tree’s spreading architecture is visible.

Listen below to learn about the partnership between founding director Charles Sprague Sargent and landscape architect Frederick Law Olmsted that resulted in the Arboretum you see today.

Keeper of the Living Collections Michael Dosmann is the head of the Arboretum’s curation department. In the segment below, he explains the challenges—and delights—of stewarding these trees.

You are standing in the premiere collection of maples in the United States, and a carefully-crafted landscape designed by Frederick Law Olmsted.

When Charles Sprague Sargent was appointed the first director of the Arboretum in 1873, he had a daunting task ahead of him. It was his responsibility to design and lay out over 100 acres of trees, shrubs, and vines.

He partnered with Frederick Law Olmsted, a prominent landscape architect, known today for designing Central Park and much of Boston’s Emerald Necklace of public parks.

Sargent wrote that he considered working with the renowned landscape architect “the greatest piece of good fortune that could possibly happen to us,” saying that “There is no one in whom I have so much confidence as in Olmsted.” Olmsted laid out the Arboretum’s system of roads.

Sargent then worked to create a naturalistic design that grouped related plants together while preserving aspects of the existing landscape. This offered opportunities for comparison for researchers and recreational visitors alike.

The careful planning extended to the archives. Sargent laid the foundation for the rigorous recordkeeping that has always been a crucial component of the Arboretum’s collecting.

Today, the Arboretum’s maple collection is nationally accredited by the Plant Collections Network, a collaboration between the American Public Gardens Association and the United States Department of Agriculture. Its conservation value has also been recognized by Botanic Gardens Conservation International.

By cultivating and stewarding a near-comprehensive collection of maples, the Arboretum aids worldwide conservation efforts. The collection contains a wide variety of maples—over 65 different species—many of which are rare or endangered in the wild.

My name is Michael Dosmann. I’m the Keeper of the Living Collections.

“Keeper,” itself, is a bit of an esoteric term, and so usually I’ll say it’s the same as a curator. My role here is no different than the curator at the Louvre or curator at the Met or a natural history collection or anything else. The curator is the primary advocate and spokesperson, steward, of not just the objects in the collection, but also all of the information attached to them. Also making sure that they are fully accessible to every single person, whether it’s a member of the public or whether it’s a scholar. And so, my role here at the Arboretum is primarily making sure that we are assembling a collection that is diverse, suiting the institution’s needs, and wearing the hat of a Plant Explorer. But then, also, developing the collection, and that means not just adding but occasionally removing—and making the decisions on what we do—what do we add, what do we subtract, how do we build out/design the collection to suit our needs—and then making sure that we’re well-documenting them, well-preserving them, and sharing them to the best of our ability.

At the Arboretum, there might be a lot of jargon, a lot of words tossed around there. We started up talking about the “living collections” or the broadly based, “the collection” of living plants. And to assemble it, we go out and we collect things. So, we’ve got the noun and the verb. We use the verb to assemble the noun.

So here at the Arboretum, you know, we’ve got roughly 16,000-17,000 living plants in the collection, if you consider those in the nursery—the young seedlings in the nursery. And so, that broad collection—you know, we have almost 2,200 species of trees, shrubs, vines, and occasional herbaceous plants from throughout the temperate earth—it’s pretty impressive because we’re trying to grow as much as possible here in sometimes-frigid New England. So that limits, a little bit, what we can grow.

Maples are some of the most recognized trees on Earth. It’s a worldwide genus, at least in the north temperate areas, in all the continents. And it’s beloved… the people, certainly, in New England love the autumn color and, certainly, to get maple syrup out of sugar maple trees. Here at the Arboretum, we have close to 70 different species from Asia, from Europe, and from North America, and some of these are very common like our red and silver maples that are indigenous to eastern North America. Others are on the brink of extinction in their native lands in Japan or in China. And so those have been assembled here at the Arboretum. And because of that breadth of species, but also, many of those species we have collected not just once, not just twice, but maybe four or five different times, we have a lot of depth in the collection. And because of that, we applied to and then received national accreditation from the Plant Collections Network, which is a joint collaborative between the American Public Gardens Association and the USDA’s National Plant Germplasm System to basically recognize well-assembled, well-curated, well-documented plant collections in North America. And so, we’re a proud holder of the National Collection of Maples.