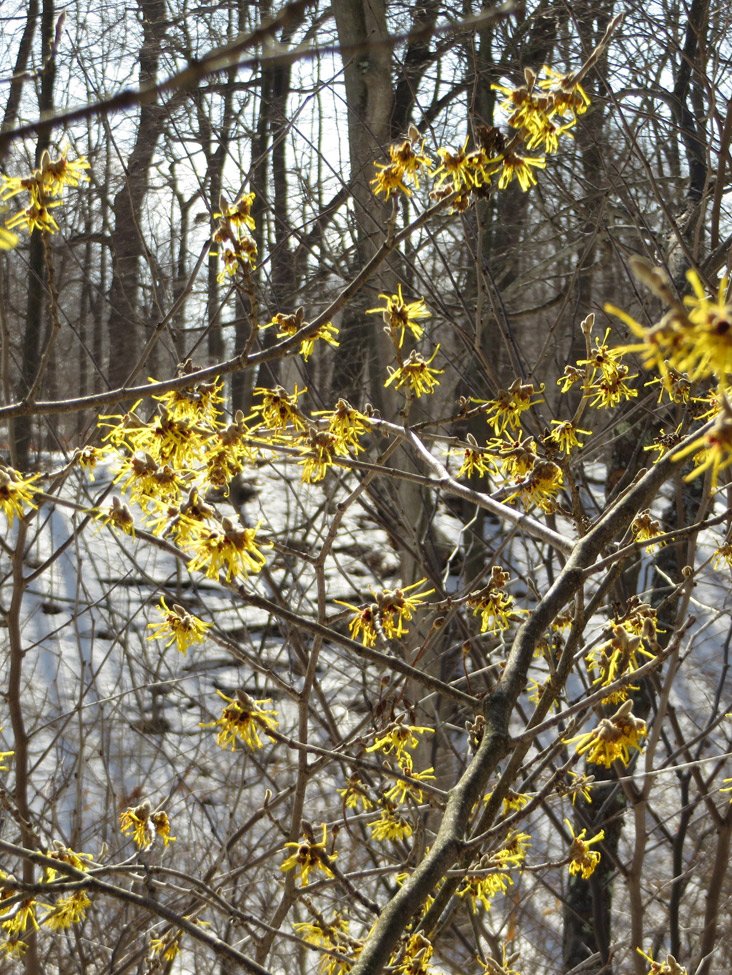 This Chinese witch-hazel is a relatively new addition to the Arboretum’s landscape. It was collected as a seedling in 1994 on a mountainside in China. In spring and summer, the shrub grows round green leaves. These leaves yellow and brown in the fall, and often remain on the branch until spring. The witch-hazel blooms in winter with a profusion of delicate yellow flowers.

Collected on a rocky ridge 3,600 feet above sea level in central China, this plant is what is called “wild-collected.” The clip below explains why that’s important.

Arboretum scientist Peter Del Tredici tells the story of collecting this plant in the segment below.

There are five known species of witch-hazel. Native to both Asia and North America, witch-hazels are commonly associated with medicinal purposes, but at the Arboretum, they’re appreciated for their dramatic flowering.

Witch-hazels bloom at different times—this Chinese witch-hazel blooms February-March, while the so-called “common witch-hazel,” native to New England, blooms October-December—but they always put on a dynamic display. The slightly crinkled petals of the flowers stand out on bare branches, curling and unfurling in response to changes in temperature.

The Arboretum has a large collection of witch-hazels—currently, over 100 specimens stand in the landscape. In 1994, Arboretum scientist Peter Del Tredici travelled to China as part of the North America-China Plant Exploration Consortium plant collecting trip to Hubei Province in central China. Representatives from several North American and Chinese botanical institutions travelled to Wudang Shan, a mountain with exceptional biodiversity, to collect plant material.

Several weeks into their expedition, on a rocky ridge 3,600 feet above sea level, Del Tredici spotted several witch-hazels loaded with seed pods. He and others collected seedlings, processed them, and shipped them to the Arboretum following United States Department of Agriculture guidelines. After growing in the Arboretum greenhouses and nurseries for several years, this witch-hazel was planted here in 2002.

Plants like this witch-hazel are called “wild-collected,” meaning they were obtained from the wild, rather than from a nursery or other cultivated source. When today’s plant collectors are in the field, they take careful notes on the environment and collection locations, information which makes wild-collected specimens especially valuable in research and conservation initiatives.

My name is Peter Del Tredici. I’ve worked here at the Arboretum for 35 years. I retired in 2014, and I’m currently the Emeritus Senior Research Scientist.

And in the fall of that year, in September, I was lucky enough to go on a trip with the North America-China Plant Exploration Consortium, known as NACPEC, to a mountain in central China, known as Wudang Shan, with a group of, I believe it was four other scientists from other botanic gardens in the United States, plus a group of collaborators from China who knew actually the area well and acted as our guides.

It was a hike. We were very wet. We call this site where we were “Hubei horticultural heaven,” because we found the paperbark maple there, we found the Stewartia sinensis growing there, and we found this beautiful witch-hazel growing there as well. It was pretty spectacular. So the weather, the fact that we were soaking wet, that didn’t really bother us that much.

This species is called the Chinese witch-hazel and that’s Hamamelis mollis, and it’s called “mollis,” that means soft. And if you actually go up and you rub the leaf a little bit, you’ll see that it’s covered with these very fine hairs. It’s very soft to the touch, a little bit like velvet, almost. It’s actually a spectacular plant.

But this was a seedling that I dug up on that hike, and to see this thing 25 years later… From my perspective, these plants are like my kids. So, it’s like my kid is grown up and is now a big success. That’s a way I tend to view it.

Going on a collecting trip is extremely exciting because I’m used to seeing these plants grown in the Arnold Arboretum and other gardens, and you see them in people’s yards, so you sort of get used to them as cultivated plants and you think of them in those terms.

﻿But when you actually see a species growing in the wild, it’s a very different experience. Plants don’t look anything the way they do when they’re cultivated at the Arboretum, or in your yard. And to actually be able to see these plants growing in the wild and understand where they come from, that is really special.