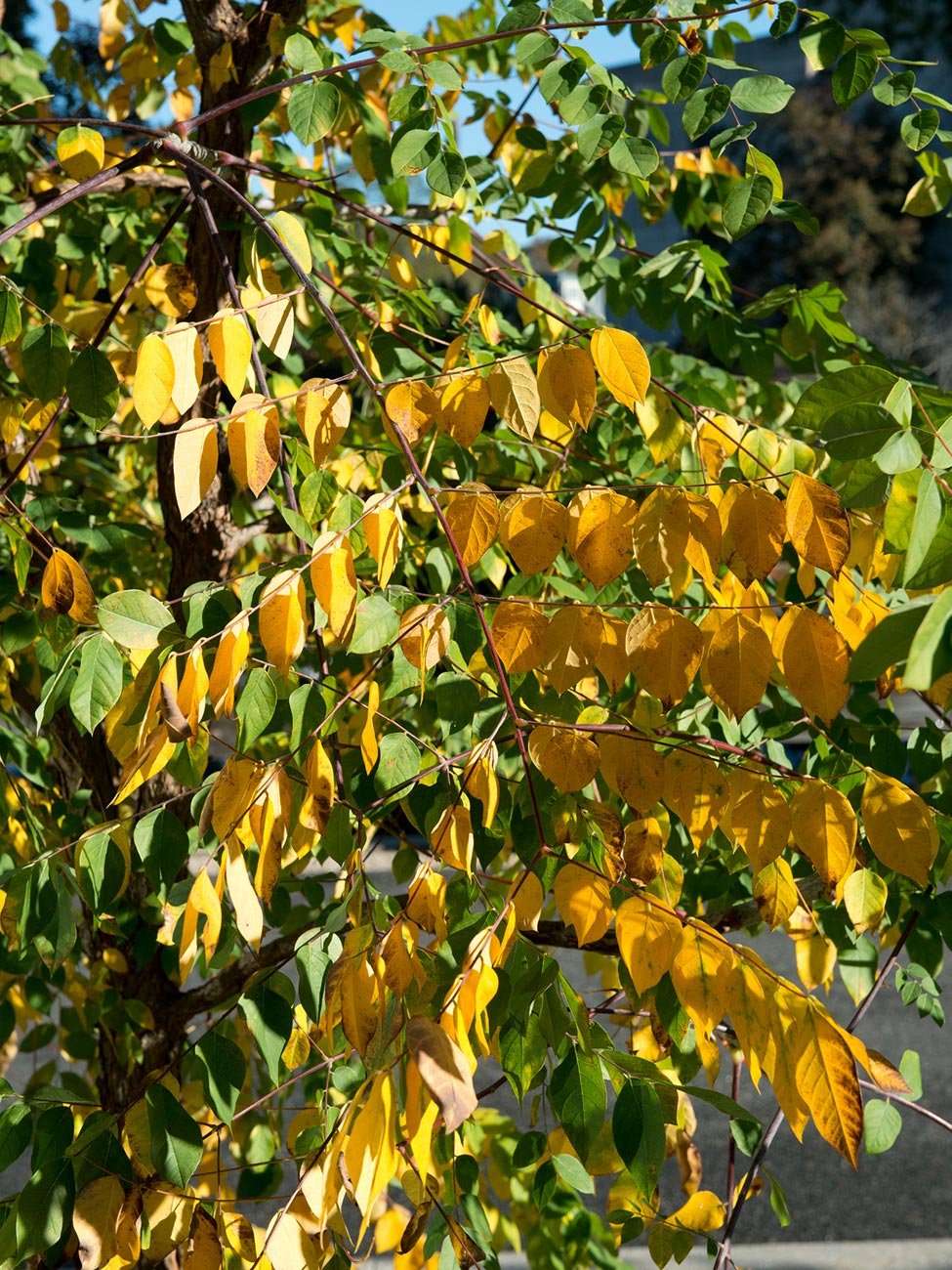 This Kentucky coffeetree is roughly the same age as the Arboretum. It arrived as seed in 1873. Native to North America, the coffeetree gets its name from early European colonists, who ground the seeds to make a coffee-like drink. In spring, the tree grows hundreds of small leaflets on branching leaves. Large seed pods develop in the summer. In fall and winter, the seed pods have fallen to the ground, bringing the bold architecture of the tree’s branches into focus.

The seed for this tree was sent to the Arboretum by a man who had no formal botanical training. Hear his story below.

When Arboretum founding director Charles Sprague Sargent began planning for the Arboretum, he corresponded with botanists at botanic gardens and research facilities around the world to gather plants. He received plant material from the Royal Botanic Gardens at Kew in the United Kingdom, the Garden of Plants in France, and the Imperial Botanic Garden at Saint Petersburg in the Russian Empire. These contributions from large institutions played a crucial role in supplying material to form the collections.

But the bedrock foundation of the collection came from botanists and citizen scientists in North America. By 1874, just two years after the establishment of the Arboretum, Sargent was corresponding with and receiving seeds from fourteen botanists, farmers, and estate owners across the United States.

One of these was Allen Hiram Curtiss. Curtiss corresponded with Asa Gray, the famed Harvard botanist, for several decades, exchanging seed, herbarium specimens, and ideas. Curtiss lived in Virginia and Florida, where he collected specimens and sent them to gardens around the world. He had no formal botanical training, but through careful and dedicated study, he established himself as a vital source of information on the flora of the Eastern Gulf Coast of the United States. Today, herbaria around the world hold specimens he provided.

Curtiss is not unique in the list of early contributors to the Arboretum. There’s Benjamin Franklin Bush, a general store owner in Missouri; Virginius Chase, a telegraph operator in rural Illinois; and George Washington Letterman, a schoolteacher near St. Louis. These citizen scientists played a vital role in shaping the landscape around you.

My name is Jonathan Damery, and I am the Editor of Arnoldia, the quarterly magazine of the Arboretum.

I first came to the Arboretum as an intern in 2009, and I came back the next year working in the duration department. There was a grant-funded project to go through all of the historical plant records, and to put all of that information into the Arboretum’s plant database. The database is the place where we record information about where the plants were collected, if they were wild-collected, if they came from a particular town, or which side of the road it came from. It gets very particular in some cases. But when the Arboretum first… when this database was first developed here, in the 1980s, only information about the living plants was put into the database.

So there’s this giant trove of material about these plants that had grown at the Arboretum, that we could only access through a sort of archival paper format. So they’re these sort of library card files, these index cards with the information on it, and you’d have to go through, look up a particular plant by its species name, and you’d find the information that way. So we wanted to put all of it into the database. So yeah, I spent about, it was an 18-month project, a lot of time just flipping through cards, entering in the information. But the amazing thing is that through the process, or now that that process is done, we can search for a particular collector even, and find out all of the plants that they ever sent to the Arboretum, and where they were collecting. We can find out information about how many times the Arboretum has tried growing a particular plant, in some cases plants that might not grow very well here. And it’s important to know how many times those attempts have been made. So, it’s a really cool project.

Along the way, I became really fascinated by these names that I kept on seeing. They would reappear, a card here, a card there, and I began wondering, “Who are these individuals?” And the amazing thing too is that my project was one form of archival digitization of putting this historical information into a digital format. But there was simultaneously all of this information from journals, from old magazines that were being digitized as well.

So, I actually could say, “Who is this person?” And I could go online, and search for that person, and find these articles from 1905, from 1895, and actually figure out who they were. And so, I began to discover, especially in North America, that there was this amazing network of collectors who were sending plant material to the Arboretum. There were doctors—which might not be too surprising given that a lot of doctors had to study botany in their training—and lawyers. But then at the same time, there were people who were, there was a telegraph operator in Northwestern Illinois, there was a schoolteacher in Grand Rapids, Michigan, a school superintendent in Allenton, Missouri, outside of St. Louis. So just this amazing sort of cross-section of men and women who were sort of, some of them were wealthy, some of them were not, but all of them were united by this shared interest in plants.

I think the story of these avocational plant collectors is so important, because it shows that in the 1870s, much like today, there is this real value to people who are just keenly interested in the world around them, who are observing, who are taking notes, who are asking questions. And that’s something that isn’t necessarily done by only professionals. It’s something that anyone can do. We can all go out into our backyards, into the nature preserves near us, into the urban wilds, and make meaningful observations, and contribute to important science.