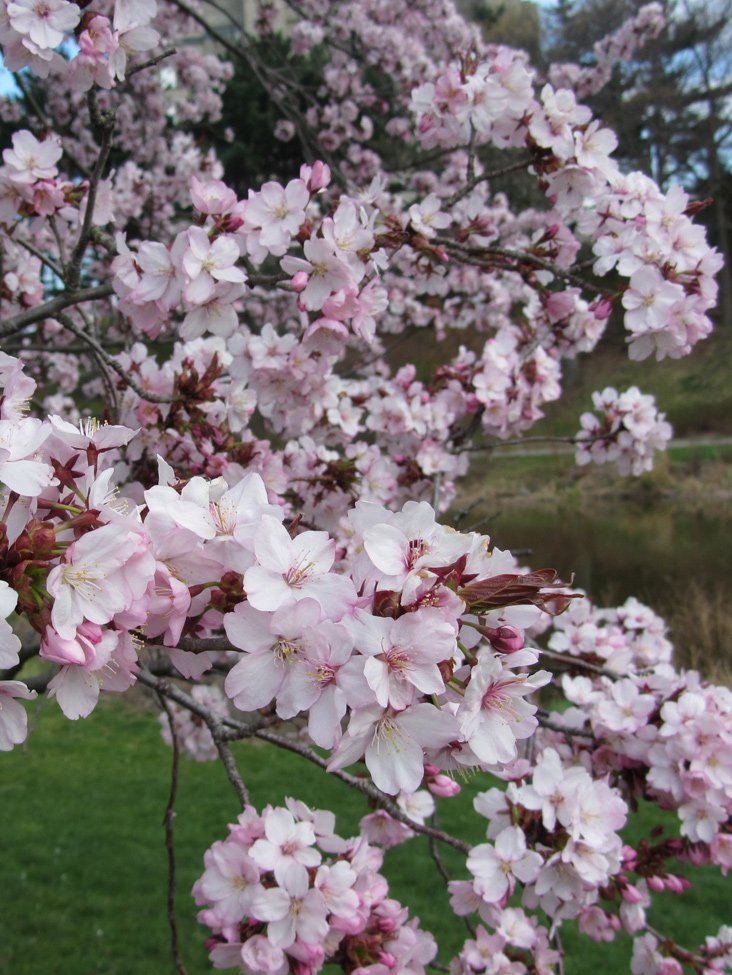 This tree, Prunus sargentii ‘Columnaris,’ is called “Sargent cherry” after the Arboretum’s founding director, Charles Sprague Sargent. In spring, the tree grows large pink flowers. The leaves’ initial purple-bronze hue transitions into dark green in summer, and turns a vibrant red in fall. Its glossy red-gray bark, with prominent pores, stands out in a winter landscape.

This is the final stop in the Introductory Tour. Click the Map button below to find more featured plants throughout the Arboretum.

In the segment below, Arboretum Director William (Ned) Friedman says that every one of the Arboretum’s staff members plays a role in stewarding this landscape.

There is an iconic photo from the early history of the Arnold Arboretum of Harvard University—a 1915 lantern slide, tinted with soft color. In the image, Arboretum founding director Charles Sprague Sargent and plant collector Ernest Wilson stand in front of a large cherry tree laden with white-pink blossoms. The men face one another, smiling, hands in the pockets of their long coats. Sargent leans on a cane.

Both men played a pivotal role in introducing flowering cherry trees to the United States in the 20th century. The tree before you, which was planted in 1958, is named after Sargent, who travelled to Japan in 1892 and came back with seeds of almost 200 different species, many of them new to cultivation outside of Japan.

Twenty years later, in 1914, Wilson traveled to Japan to conduct a thorough survey of flowering Japanese cherries and bring as much plant material back as he could. This trip resulted in his publication of Cherries of Japan, his seminal work on the trees.

It is fitting, therefore, that the photo of the two in front of a cherry tree is often shown. Sargent dedicated his career to broadening public understanding of so-called “woody plants”—trees, vines, and shrubs—and Wilson spent years travelling throughout East Asia, collecting plant material to share with Western botanists. Their collaboration, among so many others in the Arboretum’s history, has been crucial to the success of our mission to collect, study, share, and steward woody plants.

I’m William Friedman. I go by “Ned,” and that’s what everyone calls me. I’m the Director of the Arnold Arboretum of Harvard University, and I’m also an evolutionary biologist who is a professor at Harvard University.

So, one of the most amazing things about being in an arboretum is that a lot of people think that trees just grow themselves. You come here, you see these beautiful trees, you don’t have to plant them every year. It’s not like putting in a new set of bulbs for the spring at many botanical gardens. And I think it’s fair to say very few people have any idea how much it takes, in terms of effort and in the breadth of knowledge, to keep a single tree alive, let alone 16,000 trees and shrubs, and woody vines (or lianas).

So if you think about just your beautiful flowering cherry tree, the Sargent cherry, we all gather around it when it’s at its peak in the spring, and it’s just a cloud of these beautiful light pinks. And you might wonder, “Well, what does it take to grow this tree? Does it just flower every year? And we just enjoy it, and someone mows the lawn under it?” The answer is no—it’s really complicated stuff. A lot of horticultural science goes into this, a lot of data collecting. So we have IT experts, GIS experts. I like to think that if you really understood how much goes into just keeping one tree alive, it would deepen your sense of what an almost sacred place an arboretum is.

For example, to keep our trees alive across this 281-acre property, we have a team of some of the world’s most accomplished horticulturists. They have all kinds of specializations. Some might be specialists in pest control and understanding plant diseases. Others might be really expert in pruning technique, and how we actually make sure to prune the different species to create the various sizes and categories of branching that you see that make trees quite beautiful. Others would be soils experts. It’s not trivial to grow plants in the middle of Boston on old farmland, which is not great soil, and make them happy for 100 or 120 years. So, we bring this team of horticulturists with all of their expertise together—and there are probably about 20 on this team—just at the Arnold Arboretum, who are charged with the care of our plants.

But then we have records. Every tree has a story here. It may have been collected, for example, like the Sargent cherry, it’s from Japan. It’s made a journey from Japan all the way—probably across an ocean and a continent—to Boston. At some point, a long time ago, someone propagated this very tree, and someone had to dig a hole and put it in the ground, and we’ve been taking care of it, as I mentioned. But we have data on that. We know where it came from, we know who collected it. And some of that data actually sits on the wonderful little tags that you see attached to every tree.

But in this day and age, all of that data resides on computer systems. We have a whole floor of plant records experts who understand GIS, geographic information systems. And so we have a whole floor of experts who actually keep track of the data. And every time we go out and check on these trees, someone is recording plant health, somebody is making sure that if there are new observations about when things are in flower or a variety of other things, these are recorded. And then behind that, we have a set of scientists. Not only our own scientists here at Harvard, but scientists from around the world who might be studying this tree.

So this tree sits at the intersection of all kinds of worlds. Worlds of horticulture, worlds of bioinformatics and computer systems, mapping technologies, climate change science, horticultural science. It’s endless. It’s just one organism interacting with hundreds and hundreds of people.