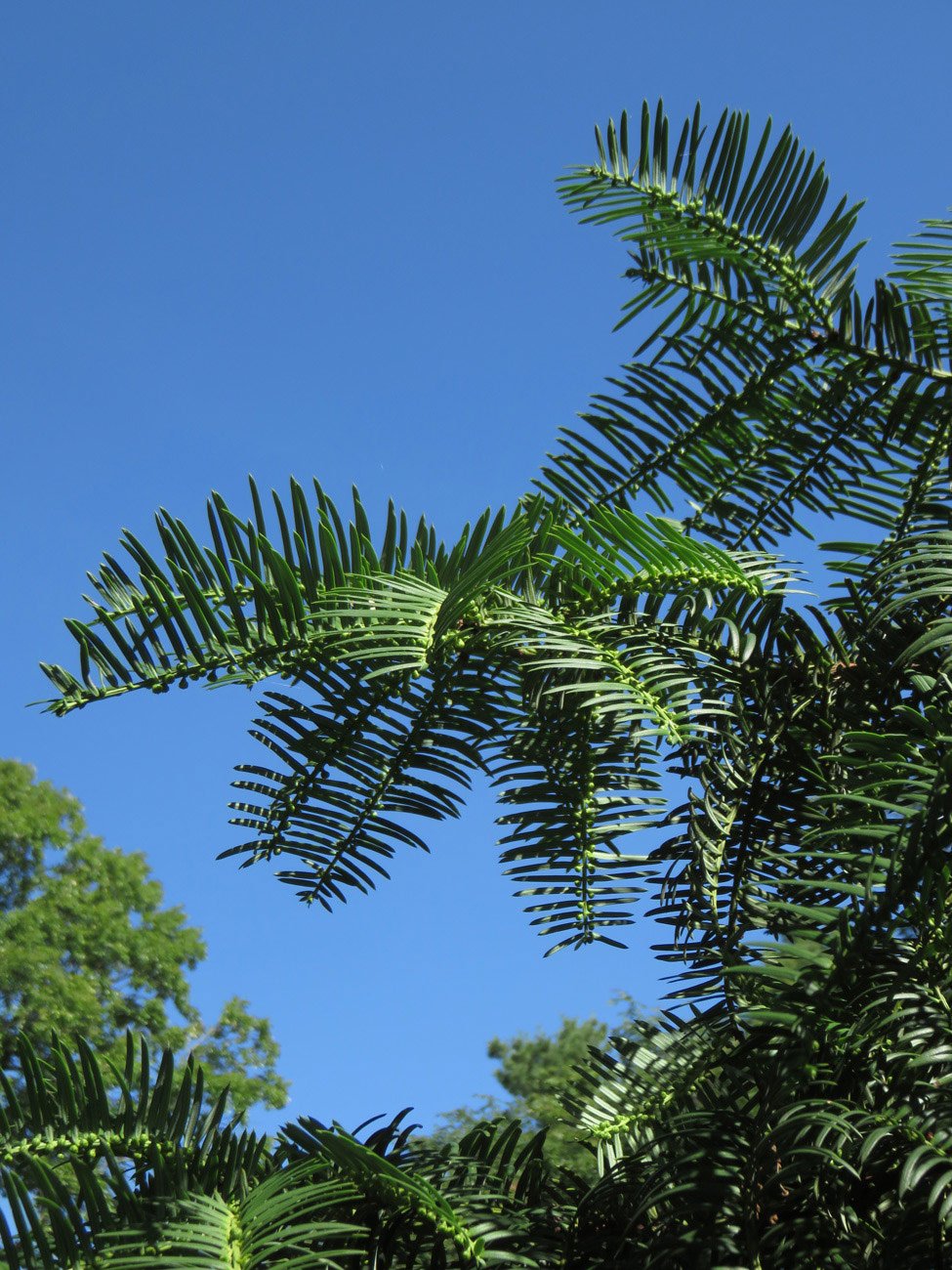 The seed for this Chinese plum yew was collected in China in 1980 on a joint plant collecting trip involving institutions from the United States and China. An evergreen conifer, the Chinese plum yew retains its green needles year-round. In summer, female plants grow red, olive-shaped seeds.

This Chinese plum yew is the result of a plant collecting trip. Learn more about the trip in the audio segment below.

Keeper of the Living Collections Michael Dosmann says that plant collecting is part of the Arboretum’s core identity. Listen below to hear him speak about over 150 years of plant collecting.

In 1980, a group of scientists and researchers embarked on a three-month trip through the Shennongjia Forest in central China. Representatives from five American institutions—including the Arnold Arboretum of Harvard University—joined colleagues from several Chinese institutions, tracing a route across Hubei Province. The trip—called the Sino-American Botanical Expedition—marked the first joint collecting trip between United States and Chinese institutions since 1949. The participants collected seeds, cuttings, and pressed herbarium specimens.

The seed for the Chinese plum yew was collected on September 26, in a thicket between a road and stream 5,000 feet above sea level. Some of the Arboretum’s 16,000 accessioned woody plants—meaning trees, shrubs, and vines that are part of a formal collection of living objects—were collected on the other side of the world. Others were collected in backyards and forests throughout North America.

Over the past century and a half, the logistics of collecting plant material have changed. Collectors work with better technology for packing and shipping plant material, and follow stricter regulations, both at home and especially abroad.

But the impulse remains the same: to grow a wide variety of woody plants, to study and learn from them, and to share them with visitors right here in Boston.

My name’s Michael Dossman. I’m the Keeper of the Living Collections.

The three plum yew that are right at the entrance to the Explorers Garden were actually collected in 1980 on the famous Sino-American Botanical Expedition. It was an arduous month-and-a-half-long trip to Hubei province and the Shennongjia region. Kind of northwestern Hubei. And Steven Spongberg on the Arnold Arboretum staff attended as our representative. It was a rich experience for him and his colleagues, and they made a number of amazing discoveries of species of plants new to science.

Plant exploration and the Arnold Arboretum are practically synonymous. Not long after the Arboretum was founded, we started exploring. We were doing it locally. Jackson Dawson, our first plant propagator superintendent, was out collecting in New England in the early/mid-1870s to acquire plant material that would be grown here at the Arnold Arboretum. So he was our first plant collector, and he kept at it for decades to come, and certainly many others followed in his footsteps. Charles Sargent, Professor Jack—John G. Jack—and, of course, the well-known plant explorer, Ernest Henry Wilson, and so on, up to the modern day. And certainly, we were known for our collections in eastern Asia, but I think people might still be surprised about how much of North America has been botanized by plant explorers working on behalf of the Arnold Arboretum. Whether that was Sargent as he was doing all of his work for a census of the trees throughout the U.S… But also individuals like Susan Delano McKelvey heading out west in a Model T to do her own botanizing. And through the Ozarks, from Ernest Jesse Palmer, and some of our own more recent collections throughout the eastern part of the US. So yeah, we’re pretty much an exploration Arboretum.

When I describe what I do, maybe it’s on a tour on Lilac Sunday, and I’ve got members of the general public who might be here for the first time, A) they don’t realize that that’s something that people ever would do—to go out and collect plants. And B) they would think that was just something that people did in Victorian times. “Oh, you mean there’s still a need to go out and botanize to collect plants, observe things?” And that would be true for anything in, I think, from a natural history collection perspective. So they’re surprised it’s done and that it’s still necessary, or still valued. But then when you start to talk to people about whether it’s, “One in five plants are threatened with extinction, there’s a need to get out there into the field” or maybe, “Some of the plants that are very common in cultivation are only known from one or two points of introduction from the wild”… People might be surprised by that and say, “Oh, well, maybe observing and collecting and introducing from other points of genetic variation is important.” And so you start to explain the value of that. And I think you start to get some heads to nod and people will think, “Oh wow, that’s pretty cool.” And they’re supportive of those ventures.

It’s relatively easy to see plant biodiversity in cultivation. Sometimes it’s just walking out your door or hopping on a plane and going to another botanical garden, an Arboretum, or going to your local garden center. And you can see these species. And they are the real thing! There’s nothing wrong with that. You can grow them in your own garden.

But there’s something completely different when you see that plant growing in the wild, raw, unvarnished in its natural habitat. You get a broader appreciation and an understanding for what comprises that species’ essence. No matter how many plants of that species you saw in cultivation, they’re a moon-cast shadow to just seeing it once in the wild.