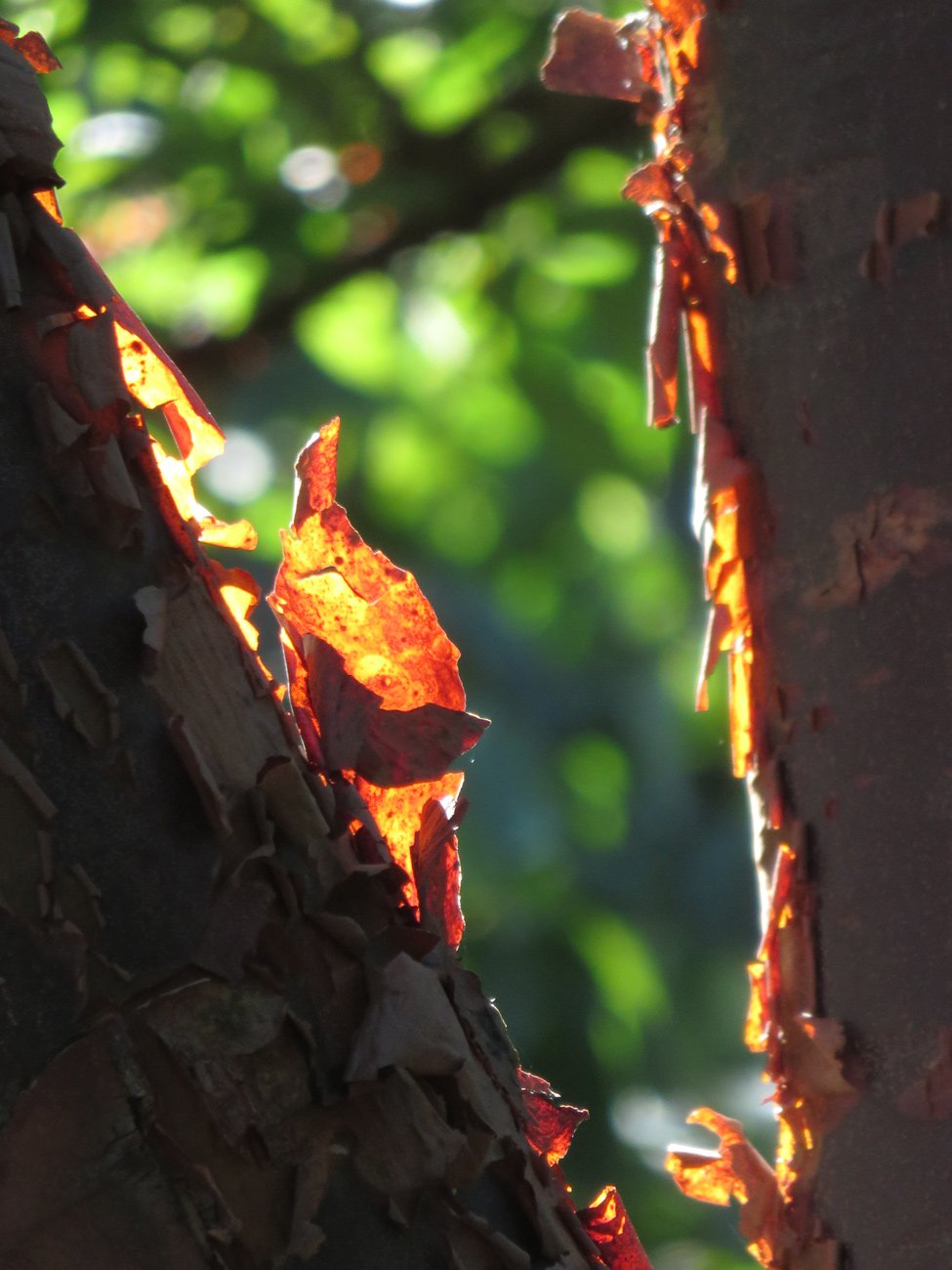 This paperbark maple was collected as a seedling in 1994 in central China—the species’ native region. In spring, the tree grows small yellow flowers. Its leaves transition from green in summer to crimson in fall. In winter, the tree’s distinctive peeling bark is on full view.

How does the Arboretum decide what plants to collect? Listen to learn how target lists are created.

Arboretum scientist Peter Del Tredici collected this plant on a mountainside in central China. Hear the story below.

The first paperbark maple in the United States was introduced at the Arboretum in 1907. A tree from that seed is growing further down the path. The tree before you was collected in central China as a seedling by Arboretum scientist Peter Del Tredici and colleagues from other botanical gardens during a 1994 trip by the North America-China Plant Exploration Consortium—or NACPEC.

Before each collecting trip, institutions create a list of “target” plants to obtain. These plants are determined based on a variety of factors, including their conservation and ornamental value, within the bounds of any broader goals an institution may have.

In collecting this maple specifically in 1994, the Arboretum’s goal was to increase the genetic diversity of this species in cultivation. The species is considered endangered in its native China, and the majority of the paperbark maples in North America are descended from a single plant. This is problematic, as species with less genetic diversity are less resistant to pests and disease and less likely to survive in varied climates.

Growing and safeguarding species outside of their native habitats—like the cultivation of paperbark maple at the Arboretum—is called “ex situ conservation.” To protect biodiversity, institutions strive to cultivate plants from all over the species’ native range. In 2015, the NACPEC partner institutions embarked on a plant collecting trip aimed at sampling every known population of paperbark maple in China. The collectors traced a route of over 2,200 miles, sampling 66 trees to gather DNA information, seed, and herbarium vouchers.

My name is Peter Del Tredici. I’m the Research Scientist Emeritus here at the Arnold Arboretum.

In 1994, I was Director of Living Collections, which meant that I was in charge of all of the decisions that related to the grounds, including their maintenance, and where trees got planted, and which trees got removed, and if there were any problems with drainage, or with storms. I had to take care of those.

I should say that, we had certain target species, but it was more or less a general collecting trip in a sense that... When you go collecting, it’s a little bit of a shot in the dark, because you don’t know, is it going to be a good seed year or not? Very few plants have a good seed crop every year. Think about your apple trees. They typically have a lot of apples every other year, and the same is of true wild plants. It depends on the weather conditions, and so on, and so forth, so you can go there and none of the plants have any seeds, so you have to be flexible about it. So, we had our target species, but we were very willing to collect whatever we happened to come across that was interesting to us.

Well, that was our number one target, was the paperbark maple, and it was a little bit like feeling like you were in horticultural heaven, because it wasn’t just the paperbark maple that was there. The zelkovas were there, the stewartias. It was an amazing number of really incredible plants, but it was the paperbark maple that we were really after, and I think we probably located maybe 25 or 30 different individuals, and they actually had seed on them, which was very exciting, but then when we—just to test the seed—cut them in half with our pruning shears to see if they had an embryo in them or not, the vast majority—in fact I would say 10 out of 10—of the seeds we sampled were empty. They had no embryos in them at all, so the trees were loaded with seeds, but they were all hollow.

It was extremely frustrating, and that’s one of the reasons that we made a decision that, well, if we wanted to bring anything back, we’re going to have to dig up some seedlings. Fortunately, there were a lot of seedlings growing underneath the mature trees, so we left the vast majority of those seedlings, but we collected I think seven or eight of those seedlings. We brought them back with us. Of course, we had somebody from the U.S. Department of Agriculture on our team, which meant that we had permission to collect seeds provided they were washed free of soil, and underwent a quarantine process of, I think, three months, once they arrived in the United States.

We collected our Acer griseum seedlings in 1994. Our oldest Acer griseums are from 1901, so over 90 years intervene between the collection of Acer griseum from China. That was one of the things we were very interested in doing, collecting more, a broader sampling of genetic diversity of this species, having it represented in the Arboretum. Those plants in 1901, they had been collected by our very own Ernest Henry Wilson, but at the time he collected, he was working for the Veitch Nursery Company, not for the Arnold Arboretum, so he collected those plants and sent them back to England, and then those plants were shipped from England to the Arnold Arboretum, so they are Wilson plants, but they’re collected by Wilson when he was working for the Veitch Nursery Company.

Well those plants from 1901—the Wilson plants—those were the first specimens of paperbark maple grown in North America, so the plants we have are the original introduction of that species into cultivation from China into North America, so they’re really extraordinary, and the same is true of our Korean stewartias and our Chinese stewartias as well, so one of the things about being up here on the Explorers Garden, it’s really... It makes it a very special place. Not only do you have these amazing plants that are the legacy of these collectors, but I like to think of the fact that there’s sort of these ghosts lurking behind these trees. These are the ghosts of the people that collected these plants and brought them here, because it’s a lot of work to actually go to China and bring these plants back alive, so they can grow here in Boston.