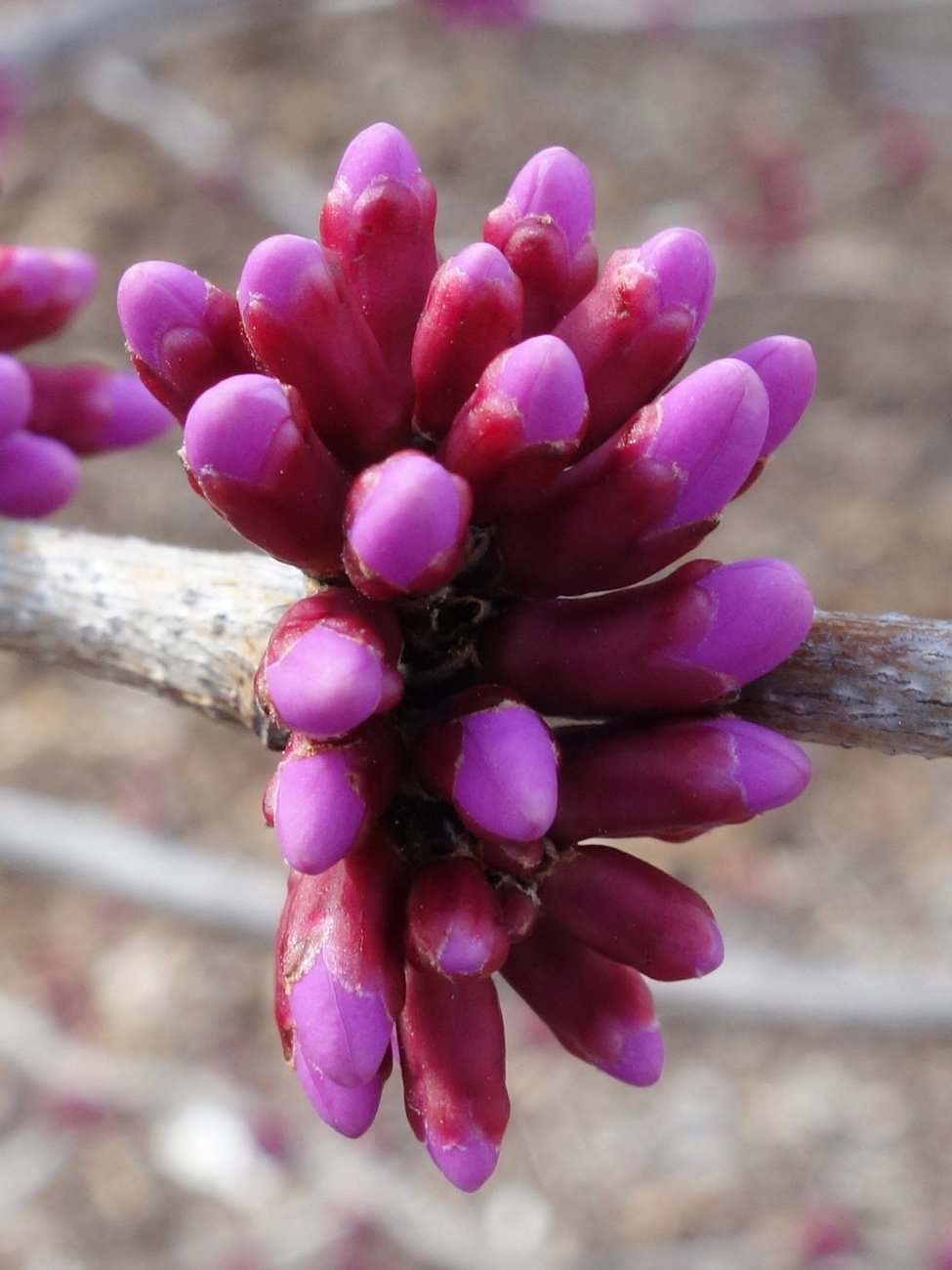 The name “redbud” is a bit of misnomer. The bare branches of this Chinese redbud, planted here in 2015, grow pink flowers in spring. By late spring, the heart-shaped leaves have emerged, and in summer, the shrub grows seed pods up to 5 inches long. In fall, the leaves turn yellow, and the seed pods remain on the branches throughout the winter.

This redbud—like many of the plants around it—is an experiment. Listen below to learn why the Explorers Garden is the Arboretum’s testing ground.

Keeper of the Living Collections Michael Dosmann collected this plant in China. Hear him talk about the trip and the surprising revelation Arboretum staff made several years afterward.

This Chinese redbud is an experiment. The species doesn’t normally tolerate Boston’s cold winters, but Arboretum staff have long recognized that the Explorers Garden provides a protected microclimate, given its sunny location on the south side of Bussey Hill.

For this reason, the garden often serves as a testing ground for species that might not survive in more exposed locations. This allows the Arboretum to protect and research a wider array of species, broadening conservation efforts, studying climate change impact scenarios, and introducing and hybridizing plants of horticultural value.

The seed for this plant was collected by Michael Dosmann, Arboretum Keeper of the Living Collections, on a trip with the North America-China Plant Exploration Consortium, also called NACPEC.

NACPEC was formed in the early 1990s. An alliance of botanical institutions and universities from North America and China, NACPEC aims to increase knowledge-sharing between the two regions with similar climates.

Over the past quarter of a century, there have been almost 20 NACPEC expeditions. Today, over 25 percent of the wild-collected Chinese plants in the Arboretum’s landscape are the result of this partnership.

Hi, my name is Michael Dosmann, and I’m the Keeper of Living Collections at the Arnold Arboretum.

In 2010, I got to participate on my first NACPEC (that’s North America China Plant Exploration Consortium—thank goodness we can just say “NACPEC,” it’s easier) trip on behalf of the Arnold Arboretum. And in that expedition, for the most part, we focused along the Qinling mountains, which is kind of southern Shaanxi. And so, we spent a couple of weeks touring around Taibai Shan, this one mountain south and west of the city of Xian—a lot of people know of it because of the Terracotta Soldiers. And then at the conclusion of that trip, we headed northeast driving to Beijing. So, we stopped in a few other spots along the way.

I was accompanied by Tony Aiello, who’s the Curator and Director of Horticulture at the Morris Arboretum down in Philadelphia, part of University of Pennsylvania. And then also Kang Wang, who is from the Beijing Botanical Garden. He’s the Director of Education there.

We had a list of a number of priority genre. Maples were important, and so, we were looking for maples from the northern part of the range that we were getting into in the Qinling mountains. And so, there are a number of maple species that we collected on that trip, as well as a few other things that we stumbled upon. Some hydrangeas, which were pretty exciting. But the maples really were the main focus.

So we had actually finished the formal part of our field work, and we’re dirty, and we’re messy, and we’re hiking in the rain, and throughout the mountains. And we were back processing seed in Xian, and we had a little afternoon off. And so, Tony and I decided to explore Xian little bit, and we’re wandering around the bazaar, sampling some great food and some noodles, and we saw planted, actually not far away from the mosque there in Xian, a redbud, genus Cercis. And it looked pretty darn close to a certain redbud that we’d been seeing out in the field, but didn’t have any seeds.

So, you get skunked. You’re out there in the field, you see the plant you’re looking for and it’s fruitless. Or you open up the fruits and there’re no seeds. We’d seen this redbud Cercis glabra a number of times, and we saw, and we thought, “Was this thing growing right there in Xian?” And it had fruit. And we open up those pods, and they had seeds. And we’re like, “Hey, score. Bingo.” So, we sampled a couple of those fruits from in the city of Xian.

The expedition might only take a couple of weeks, but the real work always begins the day after. Certainly our propagators do all their work—magic—to coax those seeds to germinate, and our horticulturists grow them on, and we plant them out into the collections. But we’re constantly observing them. We’re constantly learning something about them. And sometimes, we learn that the thing we collected is not actually the thing that we planted, or at least not by the same name. When it flowered for the first time I looked at it, and I said, “That doesn’t really fit the description or the photographs of what Cercis racemosa look like.” And I keyed it out using a set of taxonomic keys, or kind of a tool for taxonomists to figure out what species you’re looking at, and it turned out to be Cercis chinesis. A different species. That was also just as interesting. And so, we did what we should do, and we made a name change. So, we changed the name in the database, and then rolled out new tags, and there we are.

I have a lot of pride when I see some of my plants. To see plants there bearing your name as the collector. So, there’s pride with that, for certain, and one that I can share with a lot of friends, and my colleagues who’ve been along with me on these trips. It’s wonderful, and it’s humbling.