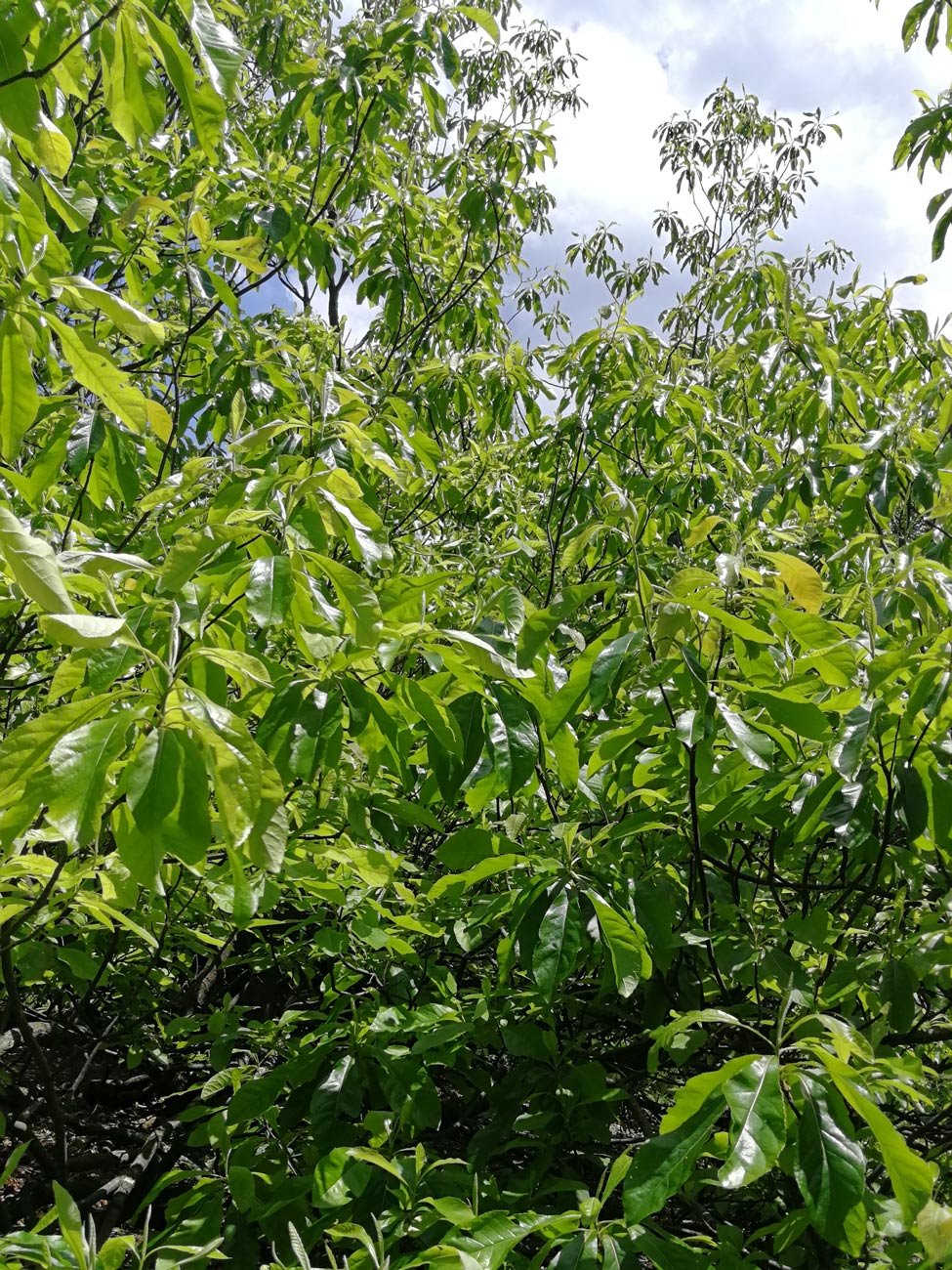 This tree and its neighbor are the largest and oldest Franklin trees in the world. In spring and summer, the tree grows large, oblong green leaves. In fall, large, sweet-smelling flowers unfurl white petals surrounding a multitude of orange stamens, while the leaves turn a bright crimson. In winter, the tree’s low, spreading architecture is visible.

The Franklin tree was extinct in the wild by 1850. Hear the story below.

Hear Jonathan Damery, Editor of Arboretum magazine Arnoldia, talk about the importance of telling stories about the relationships between people and plants.

The earliest mention of what would come to be called the Franklin tree appears in a journal entry in 1765. A father and son were on a trip through the southeastern part of the then British colony of Georgia when they noticed a striking tree growing along the banks of a river. The father, John Bartram, wrote that he’d seen “several very curious shrubs” in his journal.

Born into a Quaker family in Pennsylvania in 1699, Bartram had developed a keen interest in botany. He travelled throughout the American colonies and what is today Florida, collecting seeds of interesting plants to grow in a corner of his farm.

He also sent seeds abroad. Through his correspondence with botanists in Europe, Bartram was responsible for the introduction of many North American species into Europe. In 1765, King George III named Bartram “King’s Botanist in North America,” a position which came with £50 a year.

Bartram’s son, William, returned to the area in Georgia to collect seed of the Franklin tree several years later. In 1791, he wrote, “We never saw it any other place, nor have I ever seen it growing wild, in all my travels, from Pennsylvania to Point Coupe, on the banks of the Mississippi.” He brought the seeds back to Philadelphia. His collection of the species was timely; within 50 years, the tree was extinct in the wild. All living Franklin trees—which Bartram named for family friend Benjamin Franklin—are descended from the seeds Bartram collected.

The Arboretum received a Franklin tree in 1884. The sprawling specimens before you are the next generation of this unique plant.

My name is Jonathan Damery, and I’m the Editor of Arnoldia, the quarterly magazine of the Arboretum.

Arnoldia is, I always like to think, a sort of middle space. It’s not a peer-reviewed scientific journal, and it’s not necessarily a garden magazine that tells you, say, what to grow in your garden. Rather, I think it’s a space where researchers, in part—in some cases people who are doing taxonomy, or who are doing things related to plant anatomy, or plant evolution, or ecology—can sort of show the behind-the-scenes aspects of their work. They can tell the story, reveal the process of doing research, writing a narrative about what they do. I think it’s also a space where people can ask new questions about the work that they do that couldn’t necessarily be framed or raised in a traditional scientific journal. To me, I think it’s a publication that really is about the intersection of—this might sound a little cliché, but—people and plants that it really is putting those two together, putting human stories and plant stories side by side.

I think that one of my goals is to show plants not only as scientific objects, and not only as horticultural objects, things that we grow in our gardens, but also being cultural objects. Showing in many ways, even if the articles are not about plants at the Arboretum, reviewing the ways in which the Arboretum, much like an art museum, is collecting these important stories of people, as well as the scientific work that goes along with them.

I think one of the important things about the Franklin tree and about other old plants and the Arboretum is that they reveal, I think, the longstanding commitment, really from 1872 onward, to documenting—to having records that describe where the plants came from. In some cases it might be, as in the case of the Franklin tree, we know that it came from Thomas Meehan, a nurseryman and sort of horticultural writer in Philadelphia, in Germantown, Pennsylvania. But in other cases we know that plants were collected at a certain altitude on a particular slope of a mountain growing with 10 other particular species of plants. And I think that that commitment to documentation, whether it is in the plant records or whether it’s in the form of an Arnoldia article, or it’s in the form of some other scientific publication, that it is about not only the living object but about writing about the object, about having that sort of second set of collected material that goes along with the plants.

I think this particular plant is just a mind-boggling specimen, in addition to being an important plant, a plant that’s extinct in the wild. But just to see something like this that just is so sprawling that has these branches that keep layering in… and also the flowers! I mean, how can you talk about the Franklin tree without talking about these late summer, early fall flowers? They, in some cases, linger until the leaves are turning their bright red fall color. There’s really nothing quite like it. Imagine if the Bartrams hadn’t seen this plant growing in the wild, imagine if they hadn’t collected seed from it, to think that something like this could have been lost is quite devastating really. And to see now what the plant can do after over a hundred years growing at the Arboretum is inspiring. Imagine what this plant will be like in 200 years… in 300 years! The lease at the Arboretum is for a thousand years, so I am—well of course I won’t be here to see it, but—I just like to imagine what a Franklin tree would look like after a thousand years.

I think one of the really cool things about plants like this is that unlike a painting in a museum or something where you know the story of an artist that created it… the story of somebody who collected it, somebody who donated it to the Arboretum, somebody who donated it to the museum… With the case of plants like this Franklin tree, the object itself is living. I think it’s amazing to realize that, the plants that were collected 140 years ago for the Arboretum, all of those plants have outlived the people who collected the seed. Take the story of the Franklin tree. The collection of the Franklin tree by the Bartrams has outlived both the father and the son. It’s outlived Thomas Meehan, the nurseryman who sent it to the Arboretum. It’s outlived Charles Sargent, the founding director of the Arboretum. And I think it’s incredibly powerful to imagine that this particular plant will very well be here in 200 years and 300 years… This continuing living story of a relationship between people who observed and collected the plant and the plant as it has continued to grow.