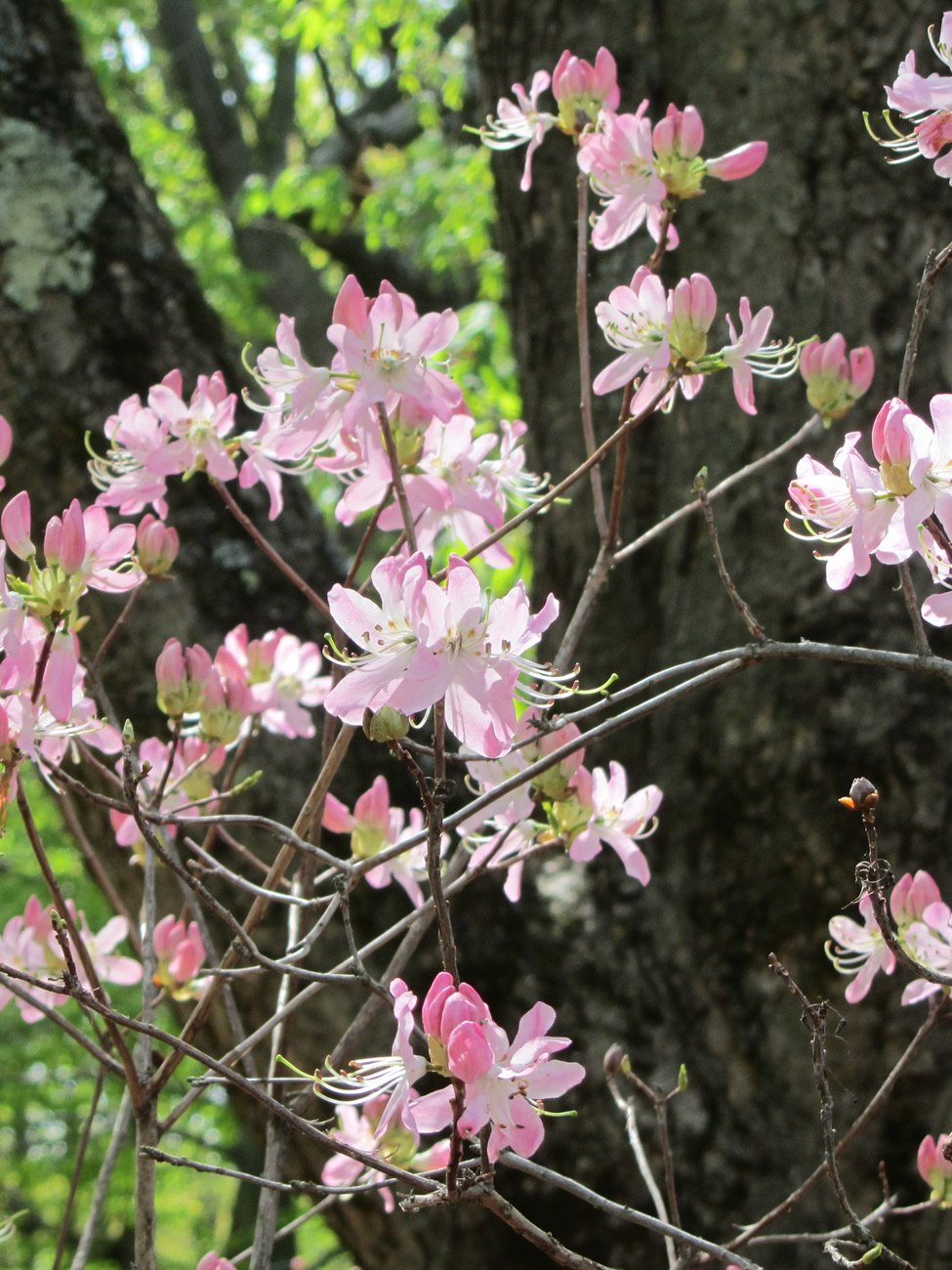 Wild populations of pinkshell azalea grow only in bogs and high elevation forests in North Carolina. In spring, the branches grow soft pink flowers with curling stamens. By summer, the shrub has grown green leaves. In fall, the leaves turn red.

Curatorial Assistant Kathryn Richardson maintains the records for the Arboretum’s conservation collections. Listen below to learn about her job.

The Arboretum has a long history with the rare pinkshell azalea. The first specimen came to the Arboretum in 1880, though the most significant collections—resulting in the seed for the plant before you—occurred a century later, during the 1985 Southeastern States Expedition through Florida, Georgia, Tennessee, and North Carolina.

The expedition was organized in partnership with the Center for Plant Conservation—also called the CPC—which was founded at the Arboretum in 1984.

The Arboretum is an active participant in the CPC, stewarding several plant types, including the pinkshell azalea. The plant’s native range in North Carolina is limited, and the plant is vulnerable to habitat destruction. The Arboretum maintains over 25 genetically distinct lineages of the plant, and has over 40 specimens planted throughout the landscape.

More than 20 percent of the Earth’s plants are threatened with extinction. Through coordinated, collaborative partnerships with initiatives like the CPC, the Arboretum works, year-round, to save threatened plants.

My name is Kathryn Richardson, I’m a curatorial assistant, and I’ve been working at the Arboretum since 2004.

My role at the Arboretum involves documenting the living collections. And I am in charge of primary documentation, which is the information that comes in with the plant, so the history of the plant before it arrives at the Arboretum, whether that’s getting the details of the plant if it’s collected in the wild, or if it comes in from another institution or a nursery. And I do a little detective work as well, so digging as deep as possible, so if we do receive it from another sister garden, I want to know where they got it from, and where they got from, and so on, and so forth.

I also work on plant nomenclature, verifying the name of the plant and doing a lot of research to search for sources that will accept the name or reject the name. And then, with that comes my work investigating whether or not the plant is of conservation concern, and so, again, doing research and working with different societies and groups that do the analysis to determine whether a plant is threatened.

And then, another part of my job is coordinating the research of the living collections, so welcoming in researchers and scholars from all over the world, whether they come to the Arboretum or we collect material or data and send that out. And again, it’s folks from all over the world and it’s from many disciplines, so the entire landscape is opened up to research. So whether they’re looking at the plants, or the soil, or insects, or fungi, we welcome that.

The Arnold Arboretum has a very long history of working in plant conservation—we’ve always known it was important. We work with the Center for Plant Conservation, which was started here at the Arnold Arboretum. So we have certain collections, taxa, that we hold. We also work with PCN, the Plant Collections Network, and that is broadly preserving germplasm, but also plants of conservation concern are held within each one of those genera as well.

And then we work with Botanic Gardens Conservation International (BCGI), which is an organization that we submit all of our living plant lists to—names—and receive a report back. They also have a program called ThreatSearch, which allows us to examine the threat level of each one of our taxa growing in our living collection. So beyond the specific organizations that we work with, such as the CPC, we are also able to analyze the entire collection and isolate plants that are of conservation concern at a global level, which is about eight percent of our collection right now, so it’s a large amount.

It’s very important that the Arboretum documents our plants of conservation concern. One, for the broader community, we’re securing germplasm ex situ, so outside of the natural environment and in living collections. We’re allowing, number one, visitors to learn about these plants, and number two, we’re providing access and accessions to sister institutions where we’re sharing germplasm and this helps preserve the line as well as opening up to researchers.

I love the work I do at the Arnold Arboretum. I feel we are benefiting the scientific community in so many ways and we’re a very special organization in that we share our data, we share all our information with as many folks that will listen. We also work with sister institutions on expeditions, we collaborate with BGCI, CPC, to work for plant conservation. Internally, all the departments work hand-in-hand, whether it’s through education, horticulture, or archives, it’s an amazing, dream place to work.