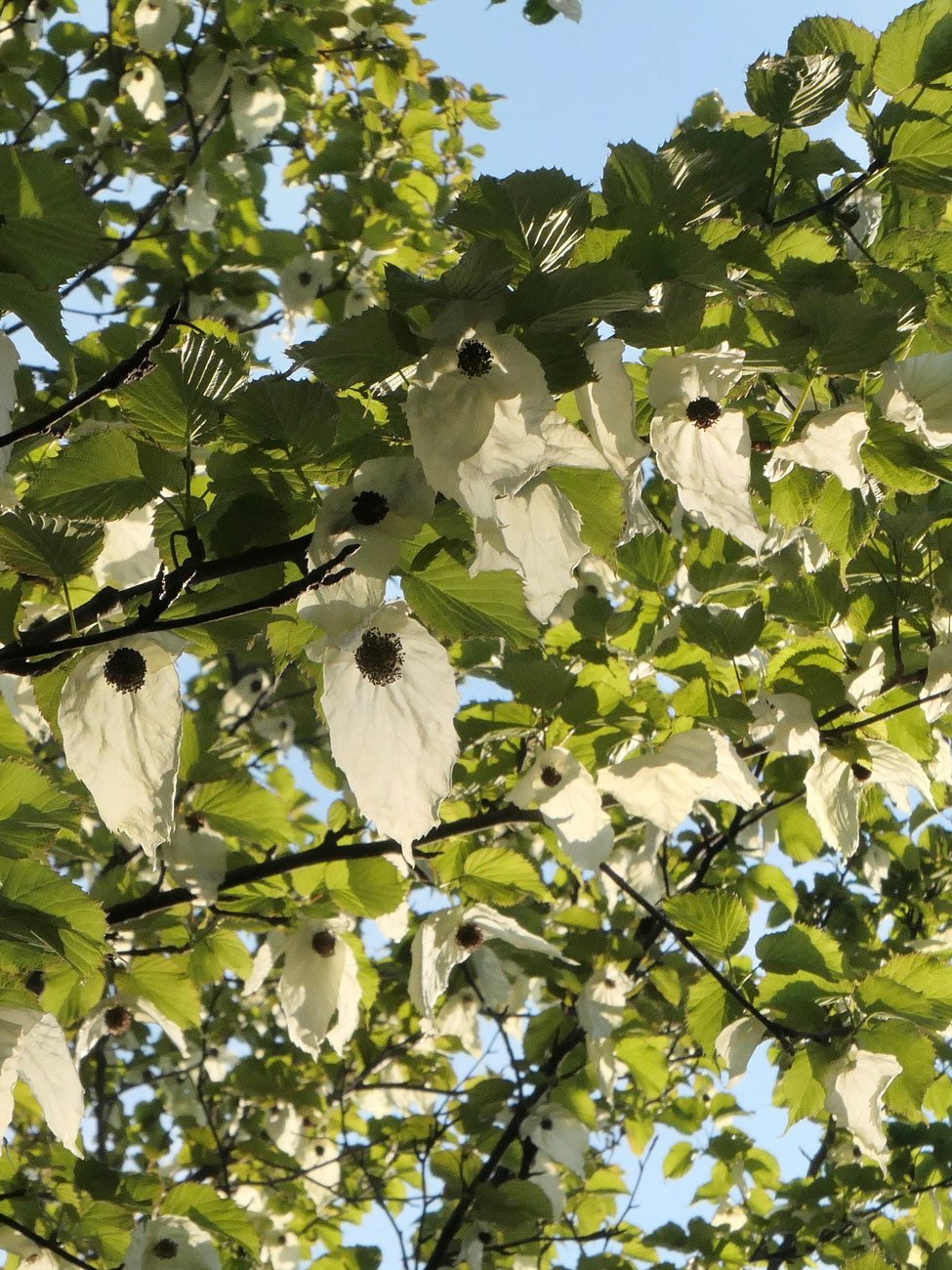 The dove tree is a perennial favorite at the Arboretum. In late spring, the tree grows spherical clusters of flowers surrounded by fluttering, white, leaf-like structures called bracts. In summer and fall, large green fruits dangle from the branches. In winter, the mottled, red-gray bark may be admired.

Celebrated plant collector Ernest Wilson collected seeds of the dove tree in central China in 1900. His trip nearly failed. Hear the story below.

Wilson’s travel journals and photographs are some of the Arboretum’s most treasured artifacts. Below, Head of the Library and Archives Lisa Pearson talks about their impact.

In 1899, Ernest Wilson was 22 years old and studying at the Royal College of Science in the United Kingdom. At the time, a booming garden and horticultural industry was scrambling for seed from East Asia, and Wilson was approached by Sir Harry Veitch for a specific mission—to travel to China to collect seeds of the dove tree, also called Davidia involucrata. The tree had been observed by Western botanists 30 years earlier, and quickly earned a reputation as a highly desirable specimen.

Wilson was given clear instructions. Veitch told him that “the object of the journey is to collect a quantity of seeds … do not dissipate time, energy or money on anything else.”

With this definitive mission, Wilson travelled to central China, spending the next several months searching for the tree. He traveled to a spot where a tree had been seen more than a decade earlier. When he arrived, he found the tree had recently been chopped down. Wilson’s frustration is clear from his account of the trip. He wrote, “I did not sleep during the night of April 25, 1900.”

Just a few weeks afterward, however, Wilson came upon a large dove tree. He sent seed back to Veitch, who distributed it worldwide.

Wilson made a name for himself as a resourceful and effective plant collector. He was recruited by the Arboretum in 1906, and spent the next two decades travelling around the world, collecting specimens and taking photographs. He left an indelible mark on the Arboretum’s landscape, and on the Arboretum’s archives, which provide rich documentation of his perspective of early 20th century East Asia.

The Arboretum’s most celebrated dove tree specimen—the one before you—was collected by Père Farges in 1897, and came here via an arboretum in Les Barres, France. A dove tree grown from Wilson’s collecting trip is growing along the path just behind you and to the right.

My name is Lisa Pearson and I’m the Head of the Library and the Archives at the Arnold Arboretum.

Ernest Henry Wilson was our probably our greatest plant collector. He was an Englishman, born in the late 19th century, and had collected previously for the Veitch Nursery Company in China. And then, after his second trip to China for Veitch Nurseries, was hired by Charles Sprague Sargent to be a plant collector for the Arboretum in the same regions in China.

So, prior to Wilson collecting for the Arnold Arboretum in China, we had only had two other collectors—Charles Sprague Sargent, himself, and John George Jack—collect a little bit in Eastern Asia. Wilson went for about three years total, collecting plants in Hubei province and Sichuan province, and brought back many thousands of different plant specimens, as well as seeds, that were then propagated in our nursery and put on the grounds.

Ernest Wilson started collecting for us in 1907 and returned to China for a second trip in 1910, and then later visited elsewhere in Asia; Japan, in 1914, and then Japan, Korea, and Taiwan, from 1917 to 1919. We’re very fortunate to have a large group of his collection notebooks of his trip diaries and many, many other items and ephemera from his journeys, and from his life as well.

We have researchers come to study Wilson’s archival materials here in-house, but it’s also conveniently online as well—we’ve been able to be part of some digitization projects, sponsored by the Harvard Libraries, and we’ve been able to digitize all of Wilson’s collection notebooks and field diaries as well as other writings, and they are available online through the Arnold Arboretum website.

When Wilson was collecting for the Veitch Nursery Company, he took with him just a little snapshot camera, but when he was preparing to go and do his expeditions for the Arnold Arboretum, Charles Sargent instructed him to go and buy the best camera outfit that he could get. And that was a Sanderson whole-plate field camera. “Whole-plate” meaning a glass plate. It was a glass plate, six inches by eight inches in a rectangle. And he got some lessons once he had this, on how to actually use the camera, and take effective pictures. He used it for taking broad landscape views of the terrain that he was traversing, but then also to take exquisite portraits of trees. And we’re very, very fortunate—he was a naturally gifted artist with a camera, and took some images that would rival some of the finest art photographers.

When Wilson returned from China, his glass-plate negatives were developed. They were actually developed at Kew by a photo finisher there and then they were all brought back to the Arnold Arboretum, and they have been part of the library’s collections since that time. We have been very fortunate in recent years to be able to digitize those—all of his photographs that he took in eastern Asia—and that’s about 2,500 or so, and they’re all available online, and we’re very happy to share them.