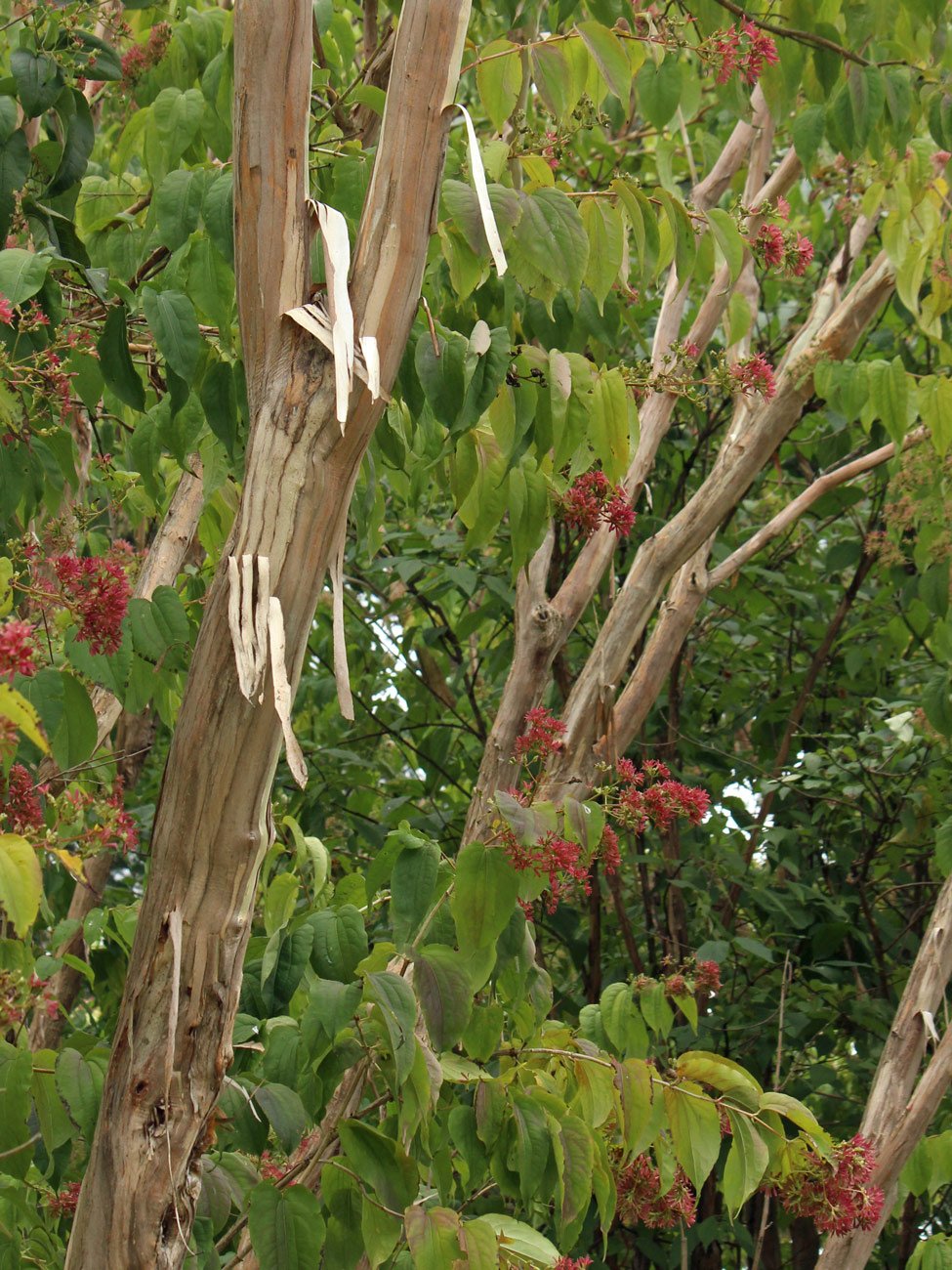 This seven son flower, and most of its neighbors in this planting bed, were propagated as cuttings from one of the first seven son flowers in the United States, an existing shrub in the Arboretum. In spring, the tree grows heart-shaped leaves. In late summer, the distinctive flower structures begin to grow in clusters of seven. The flowers’ white petals give way to striking crimson sepals. They last until the fall, when they develop into round fruits. In winter, the paperlike peeling bark—remarkable year-round—is fully visible.

Listen to Manager of Plant Production Tiffany Enzenbacher describe the work in the greenhouses, season by season.

Not every plant in the Arboretum’s landscape grew from a seed. This seven son flower was propagated—or grown—from a cutting of another seven son flower at the Arboretum—the oldest specimen in North America. The greenhouse staff worked with the horticultural crew to carefully remove twigs from the existing plant and coax them to produce new roots.

The Arboretum’s greenhouses are the starting point for every new plant at the Arboretum, whether the plant arrives as seed, a seedling, or, like this seven son flower, as a re-propagation from an existing plant. When plant collectors ship plant material—seeds, cuttings, or seedlings—from the field, it arrives at the greenhouses after it clears customs.

The first step is always the same: the new material is given a unique identifying number and entered into the Arboretum’s records. This makes the specimen an official accession in the Arboretum’s collection.

Then, the greenhouse staff begins the careful process of assessing the incoming material. This may involve cleaning seeds by soaking, drying, or sieving, and scanning for pests. The staff works quickly to determine the best protocols for propagating the material.

Over the next few years, the plants follow a progression from the humid greenhouses to individual outdoor containers. If the plants thrive, they are transplanted into the ground in longer-term outdoor nurseries. Once they are large enough, they are ready to be planted in the Arboretum’s landscape.

The length of time between when plant material enters the greenhouses and when a specimen is planted in the landscape varies, but it is usually several years. The seven son flower before you spent three years growing in the greenhouses before it was planted in this spot in 1994. Over those years, it was carefully tended and monitored by the greenhouse, curation, and horticultural staff.

My name is Tiffany Enzenbacher. As Manager of Plant Production, I oversee the work in the Dana Greenhouses and nursery facility. I work alongside the Plant Propagator and the Arboretum Greenhouse Horticulturist.

We propagate plants by seed and we have a specialized greenhouse for doing so, and then we also repropagate or clone important Arboretum historical accessions out in the landscape. If there's a specimen that's failing due to old age, disease, or insect pressure, we go and decide how to best propagate it by grafting, or hardwood, or softwood cuttings. And then we also are the overseers of the bonsai and penjing collection. We check them daily for watering and do insect and disease scouting.

I enjoy the seasonality of the position. We're not doing the same thing every day. In spring, we're focused on planting up our evaluation nursery, which we call the shade house and then filling in our three longer term nurseries—typically, a tree will stay in our nursery for two years and then we're up-planting all of our shrubs. And then, in fall, we're really focused on our Campaign for the Living Collections work. We're getting in seed from all over the world. In 2018 we got in 271 seed accessions. So along with getting all those accessions or seed lots in comes all the work of cleaning the seed, counting the seed and then researching germination protocols in order to break dormancy in that seed. And then in winter, of course, we’re planning for the next season and then hopefully having some time to work on Arnoldia articles and then preparing for all the spring ahead. And typically, our spring starts in the greenhouse in January, February, and then the work and the cycle continues on to the next year.

I think people are surprised at how long a plant stays in our facility. So typically, we say a shrub produced from a seed is at our facility for three to five years and a tree anywhere from five to seven years, which is a considerable amount of time. And there is quite a bit of labor costs for materials in that time period. And I think people also realize when they take tours or when they visit, the amount of work that just a few staff members do. We're just three strong in the wintertime and then we grow to six during the summer months with our seasonal interns and our seasonal gardener. We really accomplish a lot with just a few people.

I actually really love this plant. It is a real showstopper, especially in fall. It blooms in mid-August all the way through October when not many plants in the landscape are blooming. And it is really gorgeous. And then, especially after the petals have dropped, the sepals turn a bright red, so it is a visible from far and wide. And we actually have one of the original introductions of Heptacodium to the Arboretum at the Dana Greenhouses. So it's something that since I've worked there, I've always enjoyed looking at, and we actually just planted one in our yard last year, so it can make a nice plant, as well, at your house.