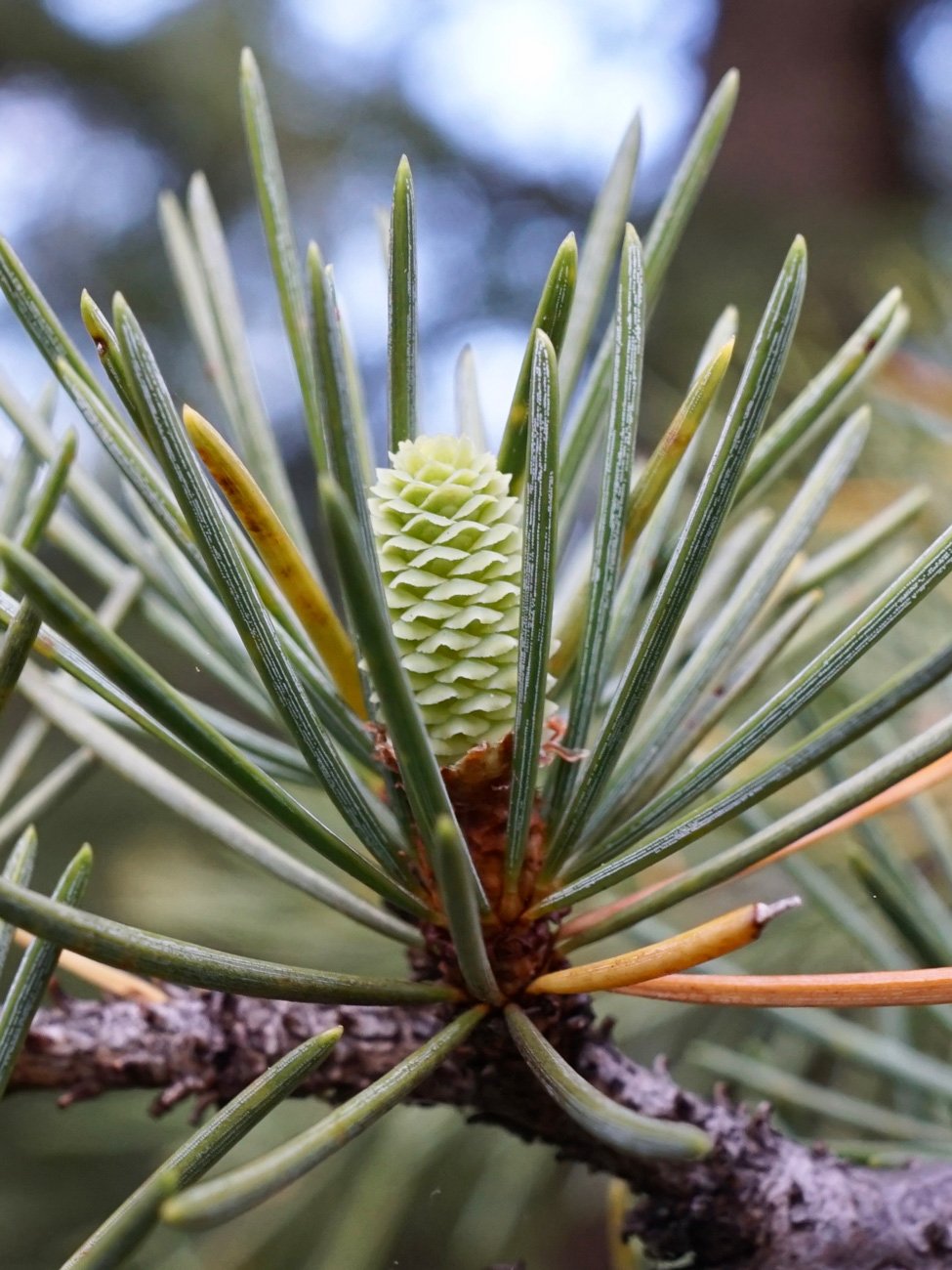 Several towering specimens of cedar of Lebanon stand just down the path. The appearance of the evergreen cedar of Lebanon changes little throughout the year. It doesn’t flower, but grows large female cones that produce seeds and male cones that produce pollen. When the pollen blows onto the female cones, they’re fertilized. In winter, the branches, which retain their needles year-round, can hold large volumes of snow.

Many cedar of Lebanon trees cannot survive in Boston’s climate. Listen below to learn why this one can.

What is hardiness testing? Keeper of the Living Collections Michael Dosmann explains.

The Arnold Arboretum of Harvard University is part-museum, part-laboratory. With a mission of cultivating the trees, shrubs, and vines that can survive in Boston’s climate, the Arboretum conducts many experiments into the hardiness of certain plants that aren’t guaranteed to survive in this landscape.

The cultivation of the cedar of Lebanon was an early success. Plants in the genus Cedrus grow in North Africa, across Asia Minor, and into India and Nepal. The cedar of Lebanon, Cedrus libani, grows in Lebanon, Syria, and Turkey.

Valued for its straight, elegant trunk and evergreen branches, cedar of Lebanon was successfully grown in Pennsylvania and New York throughout the 1800s. But American botanists couldn’t find a specimen that was hardy enough to survive Boston’s cold winters.

Since the 16th century, plant explorers had documented cedar of Lebanon trees that grew high in the Taurus Mountains of what is today Turkey, at altitudes of up to 6,500 feet. These trees stood in many feet of snow in the winter, indicating that they might be able to survive in colder environments than other cedar of Lebanon trees.

In 1900, Arboretum founding director Charles Sprague Sargent was eager to grow cedar of Lebanon. He contracted Walter Siehe, a German engineer living in the area who had written extensively about the flora of the Taurus Mountains, to collect seed from the trees.

On November 18 of 1900, Siehe wrote a letter to Sargent outlining his successes and expenses:

“Only a few days ago did I manage to obtain, after several futile attempts, 50 kilos of cones with good seeds. Since it was necessary to make a special trip, use many pack animals, and spend eight days of time for this, I am certain that you will not find the fee … too high.”

Sargent paid the fee, and the Arboretum received its shipment of cones in 1902. The propagation and horticultural staff met with immediate success—the seeds germinated and healthy specimens grew in the landscape, some of which are still standing before you today.

My name is Michael Dosmann, I am the Keeper of the Living Collections.

And generally that is, how much is that plant species able to tolerate minimum temperatures? People understand that you can’t grow palm trees in Boston outdoors, over winter, because they don’t tolerate cold temperatures. And the same can be said for a lot of other plants.

When it comes to hardiness testing, our perspective is trialing, reevaluating species to see, “Well, if we plant them out into the collection, we know that they’re hardy—they’re winter-hardy. They’re able to tolerate -5°F.” Well, maybe they’re actually hardy to -10°F, or maybe even -12°F.

And so, we’ll hedge our bets and we might plant them out, and hope that we will experience a winter that’s going to challenge them in a certain way. And so, oftentimes the evaluation is in that manner.

Also, it’s important to note that not all individuals within a species are the same. We know that. Look at every species on earth, they’re not all identical clones. Whereas one individual within a species, maybe a plant species, maybe part of the southern part of its range might be hardy to -5°F. Maybe if you collect it from the northern part of its range, it will be hardy to -25°F. That often is the trend. So what we will often do is evaluate different individuals from within a species range to look at the variation in their winter hardiness, and ability to survive out of doors.

The Arboretum’s initial charge in 1872 was to grow all of the trees, shrubs, vines, and herbaceous plants that were hardy in the Boston area. So, they had to be able to survive out of doors. Well, how do you know? Unless you try.

And so, at birth, the Arnold Arboretum started to trial—started to try things. We were receiving things from nurseries and botanical gardens in Europe. Things that were hardy in London, where they don’t get as cold as here, in the United States. Charles Sprague Sargent would try things that were shipped to him from his colleagues at Kew Gardens, or maybe the Royal Botanic Garden Edinburgh. And we would grow them out and see if they would survive. So, from a very early, early day, we were trialing plants to see if they would survive the New England climate.

Among the conifers, Cedrus libani has always been an interesting one to me. When I was living in the UK, I was actually doing some research at the university, writing about the conservation genetics of Cedrus libani, because it’s actually rare and endangered in the wild throughout its native range, not just in Lebanon, Turkey, and regions nearby.

And so, because of its threatened status, it’s something that requires a lot of additional research. So, I was really interested in it then. And ever since then, I’ve never seen them in the wild. I would love to someday. It’s always been one that I’ve been interested in just the natural history—the things that were written about them. Even going back in old herbals, people writing about them. And so there’s a lot of rich history about the tree.

And then from an ornamental perspective, they’re beautiful. With age—you have to wait 50, 75, 100 years—they became flat-topped and windswept. Even without the winds, they look a little windswept. And so, it’s one of my favorite old conifers.

You’ve got those cones, the male cones in the autumn are down low and you can brush up against them, or bounce the branches, and all of a sudden these plumes of yellow smoke, the pollen, just surround everybody. And then, if you look up, you’ll see the female cones, which are pretty stout, larger than a balled up fist, and they look like—before they shed their scales, at least the ripe ones—they look like small little screech owls sitting up there in the trees. It’s really a wonderful thing to see, the cones, both the male and the female cones, of the Cedrus libani.