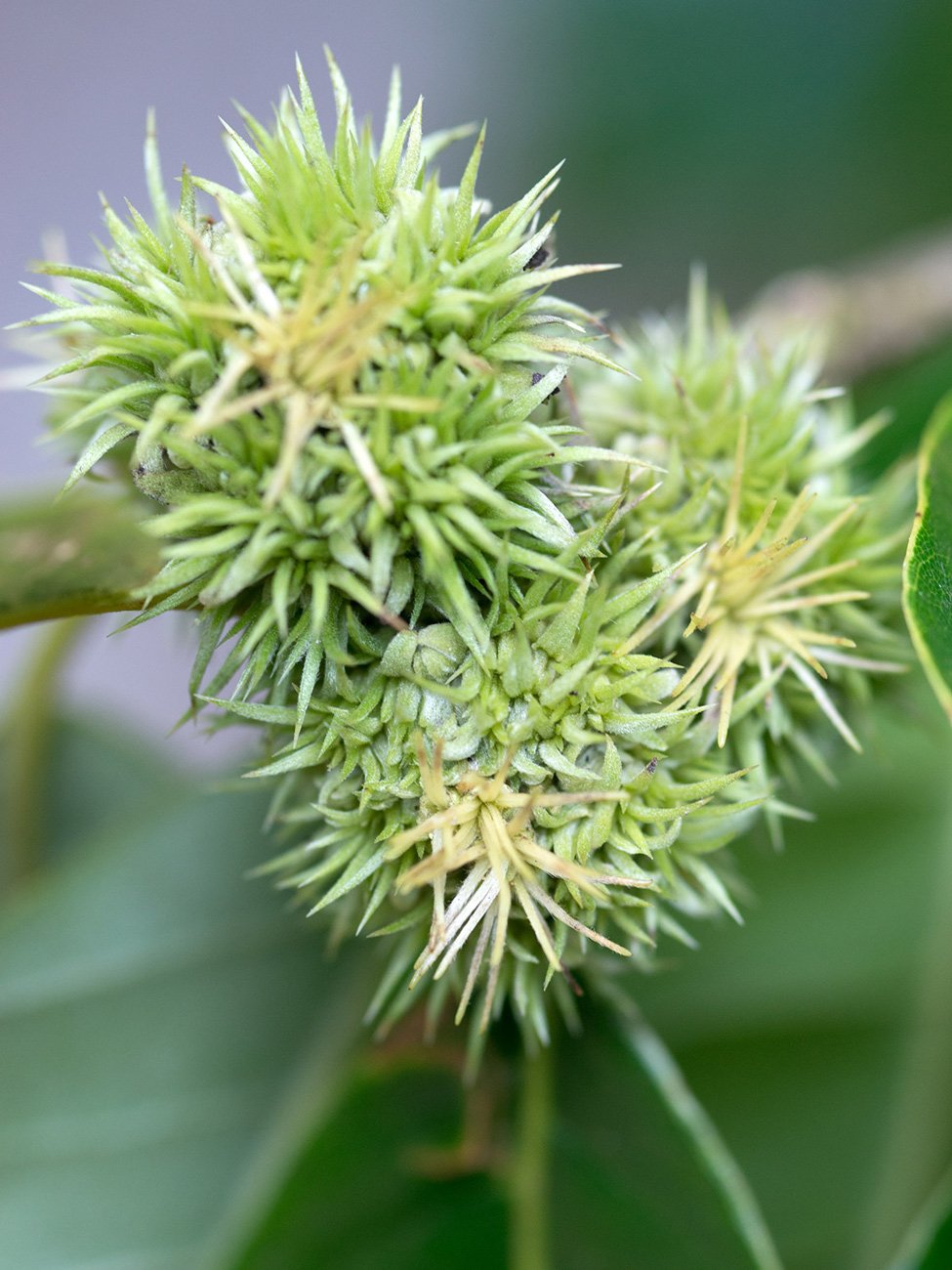 This Chinese chestnut is resistant to the chestnut blight disease that decimated the American chestnut in the first half of the 20th century. In spring, the tree’s large, dark green leaves emerge. In summer, it blooms with a profusion of long, cylindrical flower clusters—called catkins. The flowers are followed by the chestnuts, which grow in groups of two or three within spiky burrs. These burrs open in the fall, and the chestnuts fall to the ground. The leaves turn a golden yellow, and drop before winter, when the tree’s broad branch architecture can be admired.

Elizabeth Spriggs took samples from this tree for genetic analysis during her postdoctoral research as Katharine H. Putnam Fellow at the Arboretum. Hear about her research into the underlying mechanisms of chestnut blight below.

My name is Beth Spriggs and I’m a Putnam Fellow at the Arboretum.

The reason I chose chestnuts is because they’re this really charismatic group of trees that are really famous, in part, because of the chestnut blight. The chestnut blight is this plant disease that is invasive. It originated in Asia and when it arrived in North America, the trees had no natural resistance, so it killed most of the major American chestnuts in the United States. Today, most of those trees that would have been dominant forest canopy trees are now shrubs and they’re just roots sprouting and they’ve become these very small remnants of what they once were.

So my research is mostly a historical perspective on chestnut trees and chestnut blight. It’s not so much about solving the problems of the chestnut blight as much as understanding the context, and the evolutionary context, specifically. My research looks at how genetic variation is distributed across the range, which is important, potentially, for conservation, in the sense that if you wanted to restore the American chestnut, you’d want to understand which parts of the range were distinct, which parts were more diverse, which parts maybe harbored specific adaptations that would be important for repopulating parts of the chestnut range.

I think it’s also an important story for conservation because it’s one of the first examples of a tree species that was decimated because of human activities and we have seen almost the full thing play out, where the disease has been through the entire range, most of the trees are dead. There’s a lot of ongoing insects or tree diseases that have arrived that are still in an earlier stage, so understanding what happened with the chestnut I think is really important for a broader understanding of: “How do we protect our forests?”

The sampling that I’ve done in the Arboretum mostly required leaf samples and so I would visit a tree, especially early in the spring when the leaves are just starting to come out and I would collect a couple of the smallest leaves I could find and dry them in silica gel and then that was the material I would use for DNA sequencing. The smaller the leaves, the better they are for DNA sequencing because they have a lot of DNA and fewer of the secondary compounds that get in the way when you try to do DNA extractions.

Being a Putnam Fellow at the Arboretum is really special because it’s such a wonderful collection. Being based at the Arboretum, I had access to the trees almost every day where I could go out and see, you know, are they about to leaf out, what does the fruit look like? I’d photograph the leaves a lot. So having that sort of constant contact throughout the year with the plants that I was studying was really important. It was also really great because the Arboretum has a great collection of chestnuts where they have chestnuts from around the world. So side-by-side in the Arboretum, you can look at the American chestnut and the Chinese chestnut and the European chestnut... it’s really helpful, especially when you’re getting to know the group because you can look right up close at what the differences are between the species and how they’re similar, things like that.

Weld Hill is a really great research community and it’s a really wonderful place to be studying trees and plants in general. It is really fun to have multiple labs sharing the same space because we all use a lot of similar methods even if we’re working on totally different organisms. That’s been really great because I’ve learned a lot from talking to other labs and researchers who are doing similar projects. It’s also a really fun place to be because the focus is so much on plants and trees. Previous departments that I’ve been in, most of the people in the department studied animals, but at Weld Hill, almost every week we have a plant seminar. It’s just really fun to have such a focus on plant research.