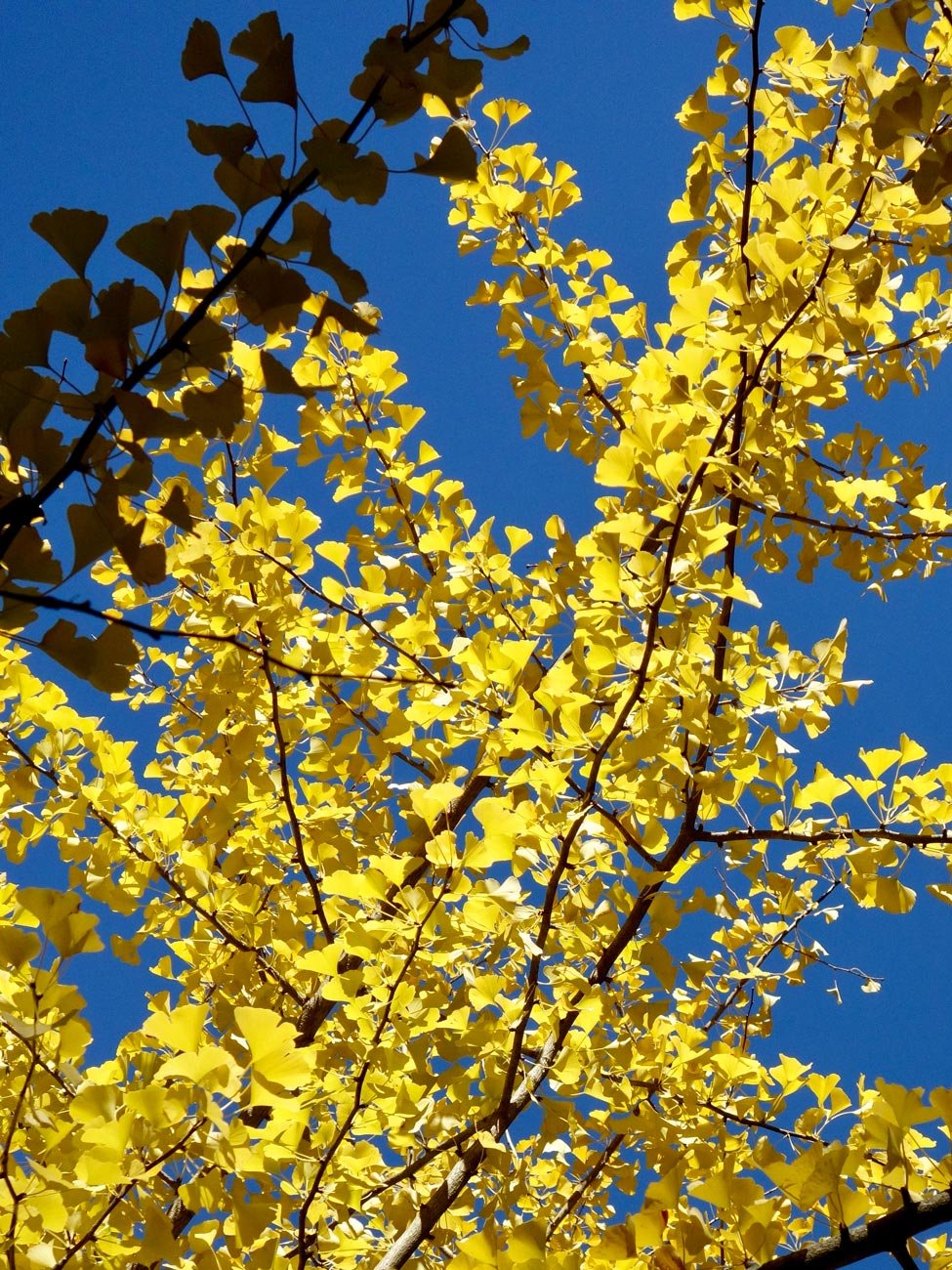 The ginkgo originated millions of years ago, and represents the sole surviving plant in its scientific genus. The tree is now rare in its native China, and the Arboretum’s collection of ginkgos has been recognized by the Plant Collections Network as contributing to the conservation of the species. In spring, the tree grows small green flowers in clusters. By summer, the tree’s distinctive, fan-shaped leaves have developed. These leaves turn yellow in the fall, and often drop at the same time as one another, creating a golden carpet beneath the tree. This tree is a female, so it also grows smelly and pulpy fruits. In winter, the horizontal arrangement of the tree’s branches can be admired.

Arboretum scientist Peter Del Tredici collected the seed for this plant, and has studied ginkgos for over three decades. Hear about his work below.

My name is Peter Del Tredici. I'm a Senior Research Scientist Emeritus here at the Arboretum.

I was late in going back to graduate school. I went to Boston University to get my PhD in biology in 1986, and the subject of my thesis was the evolution and natural history of Ginkgo biloba. I made my first trip to China in 1989 to this mountain in Eastern China, Tian Mu Shan, to study the ecology and natural history of the ginkgo tree.

It had been a point of controversy in the botanical literature: does Ginkgo biloba really exist as a wild plant, or did it just escape from cultivation having been preserved by monks in their monasteries as a sacred tree? That was an open question when I started my research in 1989. One of the areas that the Chinese themselves had highlighted is one of the areas where ginkgo probably exists as a wild tree is this mountain where ginkgo was growing more or less spontaneously.

With my Chinese collaborators from the Nanjing Botanical Garden, I went there in the fall of 1989. I spent, I think, three weeks in this reserve censusing the population, making observations, and collecting seeds from those individuals.

This plant we're looking at, number 111389*C, was a seed that I collected from one of the ginkgos growing on this Tian Mu Shan reserve. I think it was number 106, was the number I gave it. That was a tree that had pretty small seeds compared to all the other ginkgos that I found. The thing that really intrigued me was that they were all on the ground, and the squirrels that were in the forest, were not eating the seeds of this tree as opposed to eating all the seeds of the other trees. Actually, it was hard to find enough seeds to collect, because the squirrels were eating them all. I thought, "This is kind of unusual." There were a lot seeds underneath this tree and I collected them, brought them back, and this is one of the offspring from that tree growing in Tian Mu Shan, number 106.

I should say there's one other thing in relationship to this collection that you're looking at on the side of the hill. When we build a collection here at the Arboretum, we don't go to a nursery and buy ginkgo trees the way your town might, or something like that. Each one of these trees as a particular lineage, and is here for very particular reasons.

I mentioned that a number of these seedlings and cuttings came from trees growing out Tian Mu Shan, but there are two other areas in China where ginkgo grows as a wild plant. In Guizhou Province, in the central part of the country. I was there on two occasions and collected plants from two areas in Guizhou that are also considered to be home of the wild Ginkgo population.

So, this collection of plants you're looking at on the side of the hill represents the germplasm of Ginkgo biloba as a wild plant growing in China. This is a collection that, you know, there's no other collection in the United States that I'm aware of that really ... You'd have to go to China to find something comparable to this. It's really not only important in today's world, but I have no doubt that this'll become a very important resource for botanists studying Ginkgo biloba in the future.

The area here that we're in was planted in the 1990s, basically. When I was in charge of the living collections, and you can see there's some big larch trees in the background, and it was around the same time that we had a germplasm collection of Metasequoia from China, that also had to be located on the grounds of the Arboretum. In that case, that was like 125 trees, and where are you going to put them all, it becomes a big issue.

I had also been down to Tennessee earlier in the mid-‘90s, and collected seeds of Taxodium, the bald cypress. I had this idea that this would be a great area where we could put together all of the deciduous gymnosperms, those are the ones that essentially turn fall color and lose their leaves, all in one location so we could combine all of the beautiful tints of yellow, to brown, to gold.

All in this very limited area, we have the bald cypress, Taxodium; we have ginkgo; we have the golden larch, Pseudolarix; we have Metasequoia; and we have Larix. Those are the five genera of deciduous gymnosperms all growing here in one location, so they can be enjoyed and observed in one easy visit.