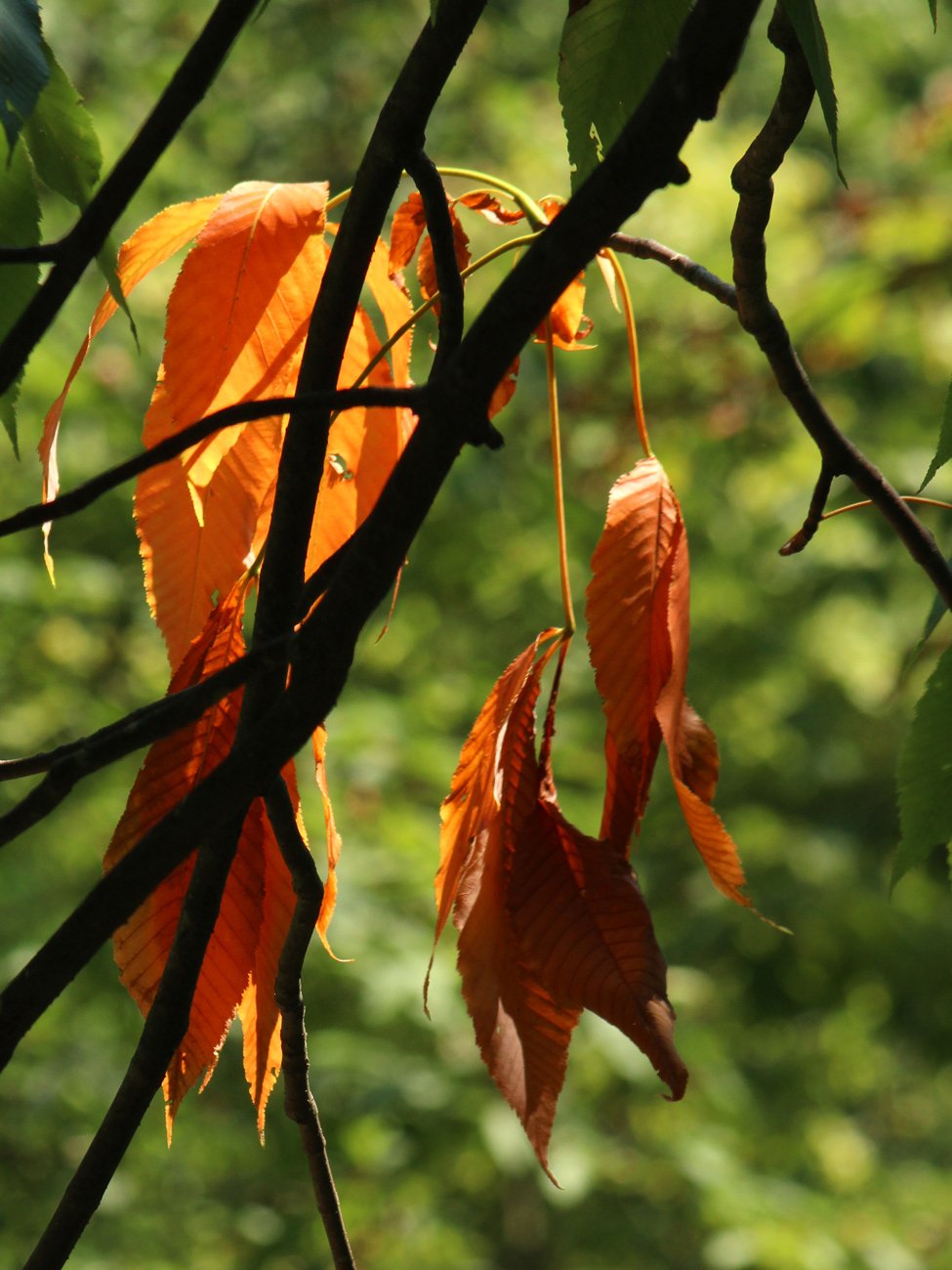 There are four woodlands in the Arboretum: Central Woods, North Woods, Hemlock Hill, and the Peters Hill Woodland. While these woodland areas were initially considered outside the scope of the formal collections, over the past few decades, many of the trees have been officially cataloged to recognize their prominence as specimens, facilitate their research use, and track their responses to pests and pathogens. Many of the trees, shrubs, and vines in these areas are still not part of the Arboretum’s cataloged collections, and the horticulture work in these areas is minimal.

When the Arboretum was founded in 1872, many of these woodlands were young forests, repopulating after a period of deforestation by colonial farmers. Arboretum director Charles Sprague Sargent and landscape architect Frederick Law Olmsted opted to leave several areas of the Arboretum as “natural” forests, in keeping with the naturalistic aesthetic for gardens of the day. They also hoped that the woodlands would serve as windbreaks, create mulch, and improve soil moisture for the Arboretum.

Today, the woodlands do just that. Over the past century and a half, these forests have continued to undergo ecological change due to natural disasters—like hurricanes—and an influx of invasive species, but they remain an important feature of this landscape.

In the segment below, Associate Project Manager Danny Schissler talks about these often-misunderstood areas.

﻿My name is Danny Schissler, and I work as Associate Project Manager at the Arnold Arboretum.

Like every one of us, every landscape has its own history. It’s often challenging for us to comprehend the scale of ecological time and imagine the many forces that have shaped a landscape and the populations of organisms it supports. Like much of New England, the lands that comprise the Arboretum’s 281 acres were once clear cut and worked by farmers through the 17th and 18th centuries.

As rapid urbanization of the Boston area caused the decline of agriculture in eastern Massachusetts, farmlands were steadily abandoned, and ecosystems shifted once again as tree populations reestablished themselves. The composition of the Arboretum’s woodlands today tells the story of what happened in the intervening decades.

North Woods, Central Woods, Peters Hill Woodland, and Hemlock Hill are four major natural woodlands within the Arboretum’s 281 acres. Over the years, these areas have been subjected to greater or lesser degrees of ecological disturbance, but are considered “natural” in the sense that they are not carefully managed and maintained in the same way as surrounding collections.

At two acres, North Woods is the smallest of the four, located on an esker, which is a gravel ridge deposited by the retreat of the glaciers that once covered New England. North Woods consists of many broad leaf native tree species, with accessioned plants planted throughout. The ecosystems in this area are frequently used as part of the educational programs of the Arboretum.

Peters Hill Woodland is another small section of dense woods between the ginkgo and crabapple collection on Peters Hill. It’s the most species-rich of the woodlands, and provides space for the greatest number of non-native species, most notably cork tree, hawthorn, and Korean mountain ash.

Central Woods is the least-disturbed natural area, containing few invasive species and dominated by native trees such as white pine; red and white oak; and beech. Its rocky soils were largely unfit for agriculture, and the land served as pasturage in the years before the Arboretum was established.

Hemlock Hill, the largest Arboretum woodland, occupies 22 acres. It’s had a complex history of disturbance, including a highly destructive hurricane in 1938, and the arrival of the hemlock woolly adelgid, an invasive sap-sucking insect. Both occurrences have had a major impact on the composition of the woodland, once dominated by eastern hemlock. This woodland is home to a number of unique birds, amphibians, ferns, and herbaceous perennials that prefer the shady understory of dense forest land.

We often use the word “natural” to vaguely describe places that seem untouched by human intervention. In reality, woodlands such as these, near urban centers, face a mounting set of ecological challenges, including rising temperatures, pollution, compaction, and pressure from invasive species. Monitoring and studying these areas helps us understand these changing environmental conditions, and predict the impact of new ecological disturbances, such as introduced species and global climate change.

My favorite plant is the pitch pine, Pinus rigida, a native pine that thrives in a variety of habitats in New England, from sandy dunes, to upland forests, to front yards. In contrast with the upright formal profile of the eastern white pine, the pitch pine takes on a rugged and irregular shape in maturity. It’s a true survivor, capable of sprouting anew after being cut or burned back to only a stump. Even quick-growing young trees take on a characteristically aged look with their colorful plated bark. Central Woods holds a few old and gnarled specimens of interest.