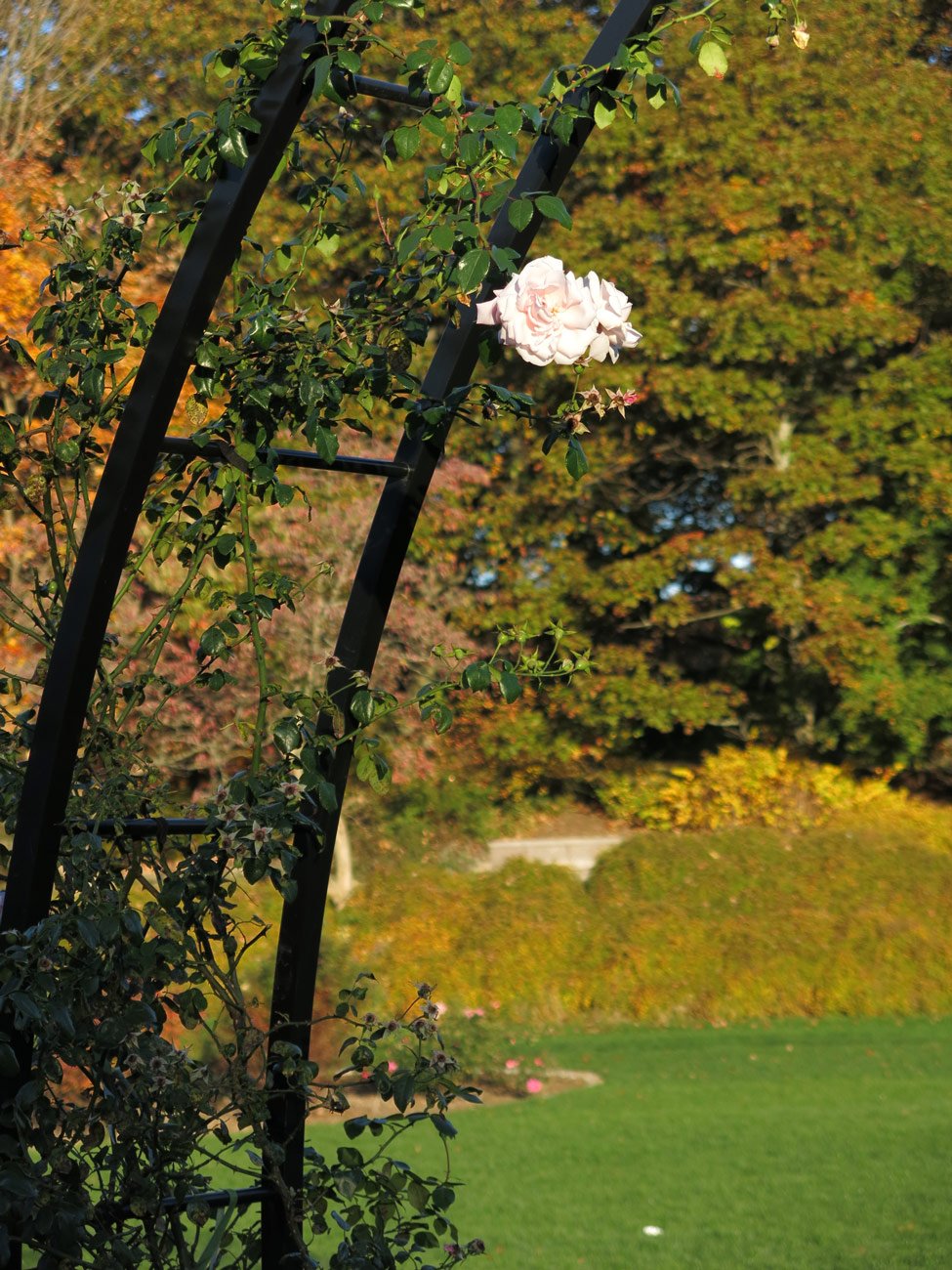 The Bradley Rosaceous Collection features over 300 species across five acres. Not a typical rose garden, the area is a collection of members of the rose family (Rosaceae), which includes familiar rose shrubs along with vines and fruit trees such as apple, pear, and cherry. Established in 1985 with a donation from longtime Arboretum benefactor Eleanor Cabot Bradley, the site was renovated in 2011 to accommodate new plants and a revamped design created in partnership with landscape designer Julie Moir Messervy. In the spring and fall, this area is frequently used for the Arboretum’s outdoor education programming for schoolchildren.

Horticulturist Scott Phillips maintains the Bradley Rosaceous Collection, Willow Path, the maple collection, and the beech collection. Listen below to hear what he loves about this area.

My name is Scott Phillips and I am the Arboretum Rosarian. Rosarian means I take care of a collection of expensive roses.

So I manage the Bradley Rosaceous Collection, which we call the BRC. What I like about it, it’s challenging, because the rose family is the most susceptible to diseases. Especially when they’re all grouped together, because they just transfer between each other so quickly. So it’s challenging. And I like that, because I like to be observant, and I like to feel like I’m making something healthier when it is sick. That’s a good feeling.

So when I began as Rosarian in September 2018, the beds in the rose garden were... Thin is a good word to describe them. So it was just roses, your classic roses like hybrid teas and floribundas and grandifloras and some knockouts. And then some species roses, and they’re the once-flowering roses. And then there were all sorts of shrubs in the rose family and just kind of gaps in between everything. And one of my favorite parts of the rose family is the herbaceous layer. And most people don’t know that the rose family has herbaceous plants, like lady’s mantle and Sanguisorba and Geums, Filipendula, Potentilla, strawberries.

So that was one of the things when I first began, was I sat down with the Curator and the Head of Horticulture and asked if I could start putting in perennial rose family plants—as almost filler—between the roses, the shrubs, and the trees. So now, instead of wood chip gaps in between plants, there’re perennial plants, which I love. I love living mulch over mulch, and I love green ground cover over brown. So I’m particularly proud of that. And I feel like the herbaceous layer was an area when I first started here, that was kind of absent. Which is fine for an arboretum, but I always remember that the woody plants that we have here, they didn’t evolve with mulched rings around them. Right? They evolved with perennial plants around them and living mulches and green mulches that aerate the roots and control the soil temperature—not piles of mulch.

So I just feel like that caught on after we started adding all these perennial plants. In the spring of 2019, we added maybe 5,000 new perennial plants of the rose family in the BRC. It caught on there and then we started adding... And now people in other sections want to do the same thing. So I’m very proud of that. More so, and hopefully the whole Arboretum will be kind of this inner connected plant world.

I just feel lucky, very lucky to wake up and have a job that I look forward to so much. I just feel that’s... The older I get, I just feel like that’s rare. And yeah, I just feel really lucky that I’m living a meaningful... Even if it’s just being a rose gardener, to me that’s... That might be it for me and I love that. I think that’s in my blood to be like that and live a life like that. And for me to be doing it, I just feel really fortunate that I’m doing something that not only makes me happy, but it keeps me grounded and balances me out. I’m not trying to do anything else. I’m totally content in the rose garden. If I do this for the rest of my life, I’d be thrilled. You know? So yeah, I’m just very thankful that my life is like that. I feel lucky, like I hit the lottery or something. You know?