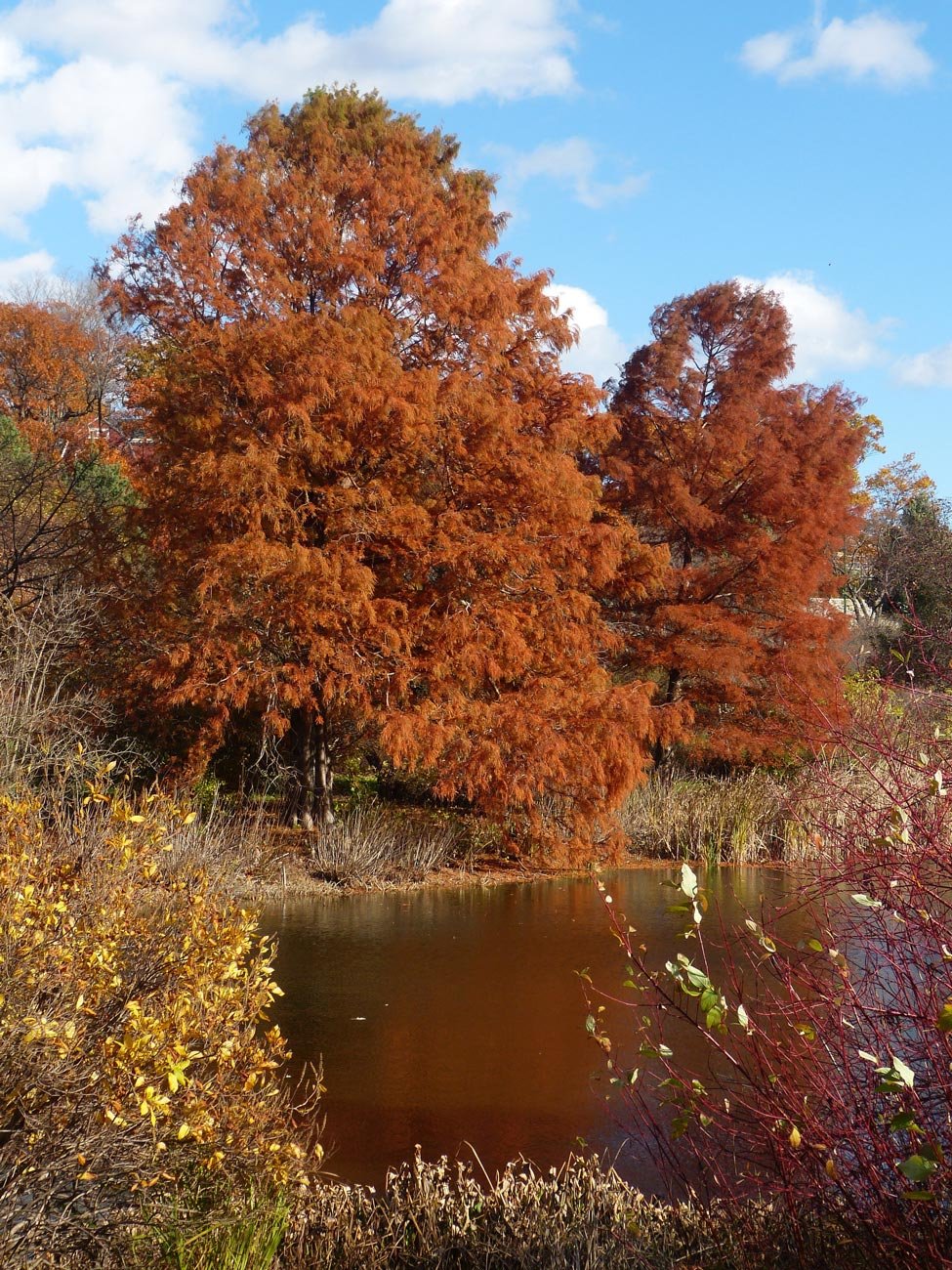 The three ponds that flank the Bradley Rosaceous Collection were created in the late 1800s. The area is a natural drainage site—too wet to cultivate the shrubs that were initially sited here. Peat was removed from three locations, and the resulting ponds were tied into a major network of drainage tiles which connect to the North Meadow. The peat was used as fertilizer for the Arboretum’s early plantings. Today, the ponds are surrounded by plants that prefer moist soils, including shadbushes, dogwoods, elderberries, and azaleas. The ponds also host a variety of wildlife—birds, insects, amphibians, reptiles, and mammals—and the area is often used as a site for children’s education programming.

Nature Education Specialist Ana Maria Caballero leads students and educators through programming at the ponds. Listen below to hear more.

My name is Ana Maria Caballero and I’m the Nature Education Specialist. I began my relationship with the Arboretum in about 2010.

So, at its core, my job is about helping children and adults take advantage of the outdoors to learn more about life science. During the spring and fall, I lead schoolchildren in grades pre-K through fifth grade in our various outdoor Field Study Experiences. I’m also involved in the training of our incredibly dedicated Field Study guides. Training includes learning about child development, teaching strategies, and the botanic component of our programs. Another part of my job is to engage directly with educators from the Boston Public Schools and beyond through professional development programming. So I have a couple of projects that I work on. One is a monthly landscape exploration called the Arboretum for Educators, and then there’s a yearly Summer Institute for more in-depth learning. But in both of these projects, the goal is the same—to help educators become more knowledgeable and confident about using the outdoors for meaningful life science instruction that’s engaging and deeply connected to the classroom learning that happens in formal settings.

So here’s an example of I think why it is so important to work with children outside. We usually bring our kindergartners and our first graders to the ponds to learn about habitats. A while back, we had a group looking very carefully at the water and all of a sudden, this incredibly huge snapping turtle pops right up with its nose peeking through. You can see its nostrils, its reptilian eyes, this massive shell, and a very sharp, pointy tail. It’s just swimming there close to the shore, curious about what’s going on. One of the first grade boys asks, “What’s that?” Our guide replies that it’s a snapping turtle. And this boy just looks at her and says emphatically, “No, it’s not a turtle.” And no matter how many different ways the guide tried to convince this boy that it was in fact a turtle, this first grader was not going to be convinced.

So we try to figure out what is going on here. All I can think of is this boy has an image of what a turtle is. It’s the turtle they see in a picture book with a nice round big shell sitting on the grass. Very turtle-like, and so different from this snapping turtle. So this young boy had never been in a situation where that image of what he had in his head had been challenged. So here’s something challenging that he can’t really make sense of, and yet, he’s having the opportunity to see that, “Well, it looks a little bit like a turtle, but it’s not a turtle because that’s not what I think of as a turtle.” To me, this is a great example of why teaching outdoors is so important for children. They get to see, in real life, what the diversity of nature really is.

It’s really gratifying, because I had been a classroom teacher for a long time, and I switched to working here. I can still be a teacher, but the teaching that I do—that we do—in the field is so much more meaningful and connected. We take children’s wonders and just go with the flow with them. They’re interested in this or that, we can pursue that interest with the children, and it’s so much more connected to what they’re interested in. They get to touch, they get to feel, they get to hear, they get to see. They get to try out different things that they wouldn’t necessarily think of. And I think when they’re out in the field with us, they also let some of their guards down. They can make mistakes, or they can say things that seem a little bit silly, but in fact aren’t, because what they’re looking at is just so wonderful.

I think, to me, the most important core belief is this idea that the children really learn when they’re completely engaged in the learning, when they’re directing their understanding. When we’re outside with kids and we’re using nature to teach them about very important concepts of life science—because they can touch, and feel, and hear, and use their entire bodies to engage in this concept—what they’re learning becomes much more connected. And also it’s more complex, because instead of just simply learning that yes, plants need air, water, sun, shelter, soil in order to grow, they actually see that there are thousands of different plants. Even though they all need the sun, some of them grow better in shade. Some grow better in bright sunshine. Some are bigger, and some are smaller, and it’s really related to those basic needs that plants have. I think that children go beyond a list of what they’re learning in school by really seeing how that plays out in real life.