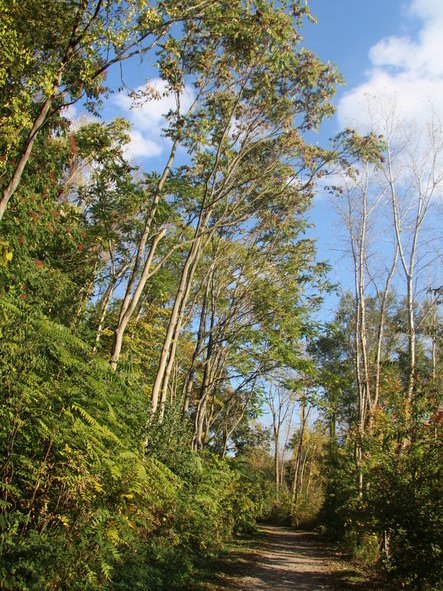 Bussey Brook Meadow is an “urban wild,” a space that is largely unmanaged, allowing researchers to observe long-term patterns and changes in urban ecology. The Arboretum acquired the 24-acre parcel of land in 1996 in partnership with the Arboretum Park Conservancy, a nonprofit organization. The space was originally wetlands, and was gradually filled in over the centuries. Today, the space includes wetland areas, open meadows, and woodlands that are home to a range of native and nonnative species. The Blackwell Footpath through Bussey Brook Meadow leads to the Forest Hills MBTA transit station.

My name is Peter Del Tredici. I’m the Senior Research Scientist Emeritus at the Arnold Arboretum.

The rest of the main body of the Arboretum is maintained to a very high level because we’ve got these collections of amazing plants. Every individual is curated with an accession number and geo-located position and it’s very carefully mapped. Where as, you go to Bussey Brook Meadow and basically things are just... There’s nature allowed to do whatever it wants.

I call it “urban nature.” Most of the plants that are growing there are not native to the area. They’re what I call “cosmopolitan urban vegetation.” Some people might call them invasive species, but the fact of the matter is that they’re actually growing under extremely difficult conditions, and they’re actually flourishing and providing lots of ecological services in this area that, without them, would be much poorer.

So, I feel that this type of landscape that you see in Bussey Brook Meadow, even though it’s not a native landscape, is really important in terms of providing habitat for wildlife. And this is what nature actually looks like in a city. In a city, most of the native plants have been driven out by urbanization, and what we get when you leave it alone, is this this collection of this very cosmopolitan array of species from all over the world. So some of them are native, but a lot of them are from Europe and a lot of them from Asia. And you know, if you leave them alone, they’ll actually come together and form, spontaneously, their own ecology—and it’s a very functional ecology.

Now, Boston is a very prosperous city, like New York, like San Francisco, so that we have vacant land here in the city, but it doesn’t remain vacant for very long, five or ten years at the very most, before some development happens. And so, what happens when you leave urban land alone, from an ecological point of view? We don’t really have a good idea of this because there’s really very little land that’s left alone. So, in my opinion, I think leaving nature alone is oftentimes a really good strategy to build a stable ecology. So I think one of the really important things that we can learn from Bussey Brook Meadow is nature, if left to its own devices, can actually help really make this place a really functional ecological landscape.

The thing about that’s great, not only about Bussey Brook Meadow, but about the Arboretum, is that I’ve worked here for 35 years, and every time I go out, I see something that I haven’t seen before. I can pretty much guarantee you this will happen.