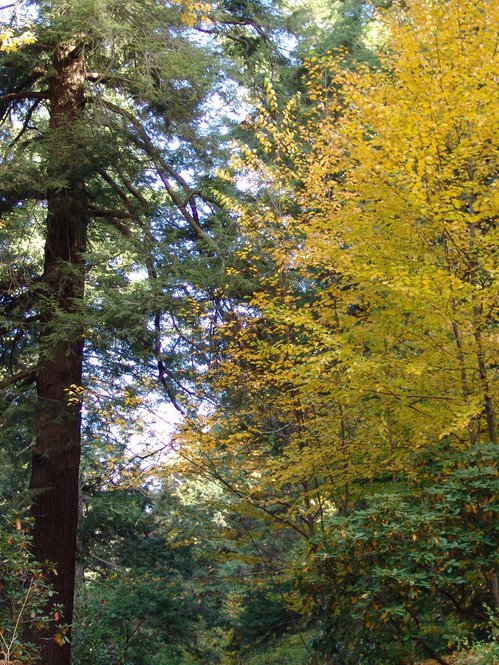 The 22 acres that make up Hemlock Hill have undergone many changes throughout the years. What looks like an ancient, old-growth forest is actually a landscape in flux. In the early 1800s, the land belonged to Benjamin Bussey, who kept the rocky expanse of eastern hemlocks open to the public. Visitors—including influential Transcendentalist thinker Margaret Fuller—explored the landscape. In the first century of the Arboretum, a few disasters changed the landscape of the hill—a fire in 1932, and the hurricane of 1938, which brought down 400 trees. In recent years, the hillsides have been marked by the invasion of an insect, the hemlock woolly adelgid, which kills eastern hemlocks. The number of eastern hemlocks on Hemlock Hill has decreased by about 30% since 1950. Specimens of Chinese hemlock, which is resistant to the hemlock woolly adelgid, have been introduced, and new stands of black birch have grown up, which are helping to preserve the understory—the plants that live under the canopy of larger trees. Arboretum researchers have also re-introduced over 100 eastern hemlocks, grown from trees in the wild that have not been affected by the insect, in the hopes that they will prove resilient.

Manager of Children’s Education Nancy Sableski organizes the Arboretum’s Field Studies Program for schoolchildren. Learn about the programs she leads on Hemlock Hill.

My name is Nancy Sableski and I’m the Manager of Children’s Education.

As the Manager of Children’s Education, I would say it’s a position that has a lot of different hats. Primarily, I run the Field Study Experiences for children, which is a program that serves students in the Boston Public Schools. We run outdoor science education programs for children from preschool through grade five in different parts of the Arboretum. We have seven different programs, so preschoolers come for an exploration, and then each grade, the experience outdoors is built around what’s going on in the classroom in terms of life science study. So that’s running those programs, recruiting and training the guides—who are now, we’re up to about 60 volunteers. That’s a big part of making sure that we’re running really successful programs for the students.

Also, in conjunction with the Nature Education Specialist, there’s a lot of work on the training for the volunteers. There’re revisions that we make to the actual programs themselves based on our observations and what the guides are telling us about what works or what could work better. So that’s a large chunk of what I do.

I’m also trying to bring in more opportunities to the Arboretum for families to engage with the landscape. So I have a monthly set of storywalks in the landscape. Storywalks are, basically, you take children’s books apart and then you reformat them to be on individual signs that lead families through the landscape. So the family is having an outdoor experience, exercising, and learning about the natural world, and maybe learning some new words in the process, as well.

And that is connected to another thing that I’m working on, I just call it “family hikes,” that take place on a monthly basis, and they are to get families, especially with young children, out in the Arboretum, observing natural phenomena and getting off the pavement and into the woods or into the edges of the woods—someplace that maybe they wouldn’t go by themselves.

Our programming is very age-specific. For fifth graders, we have an ecosystem study on Hemlock Hill that looks at both the living and the nonliving things on Hemlock Hill, for the students to come to better understand what you would expect to find in a local urban forest in Boston. And to also understand, one of the science standards that students study at this level is how matter travels through an ecosystem, so we’re looking at how plants photosynthesize and capture carbon and then what happens to that carbon as it is consumed, or as it decomposes, where that carbon goes.

I’m going to tell a story that I think illustrates how valuable a field study can be in a child’s life. I had a group of fifth graders on Hemlock Hill and one of the students, a boy, he wasn’t excited to be at the Arboretum, and as we were starting our search for plants in our plot, he said to me, “This place is really creepy like something could just jump out at you from anywhere.” And I remember that went right into my auditory memory forever. And we walked around, we started looking for plants. I had him touch some ferns, and we looked on the undersides of the birch leaves, and we saw little insects, and brought our plant collection back onto the mat. And then we went back out again to collect animals. And so that first statement was in the first 30 minutes of the program.

In the next 30 minutes of the program, he was back on the tarp with an animal in a bug box. And he said, “This place is funner than a museum, if funner is a word.” And then we went out and did some more exploring and later on he said, “I wish every day was an Arboretum day.” So what that tells me is, within 90 minutes, this fifth grade child has been able to not just change his mind about what it means to be outside, but to put it into words, and share it with me and anybody else. And I just think that is so wonderful and so indicative of the value of taking children outside. And, of course, I wished that every day for that child could be an Arboretum day. I would love to accompany that child every day and see what unfolds for him. But I think that that story is illustrative of what it means to be a child here at the Arboretum for something that you didn’t know you’re going to love as much as you actually did.