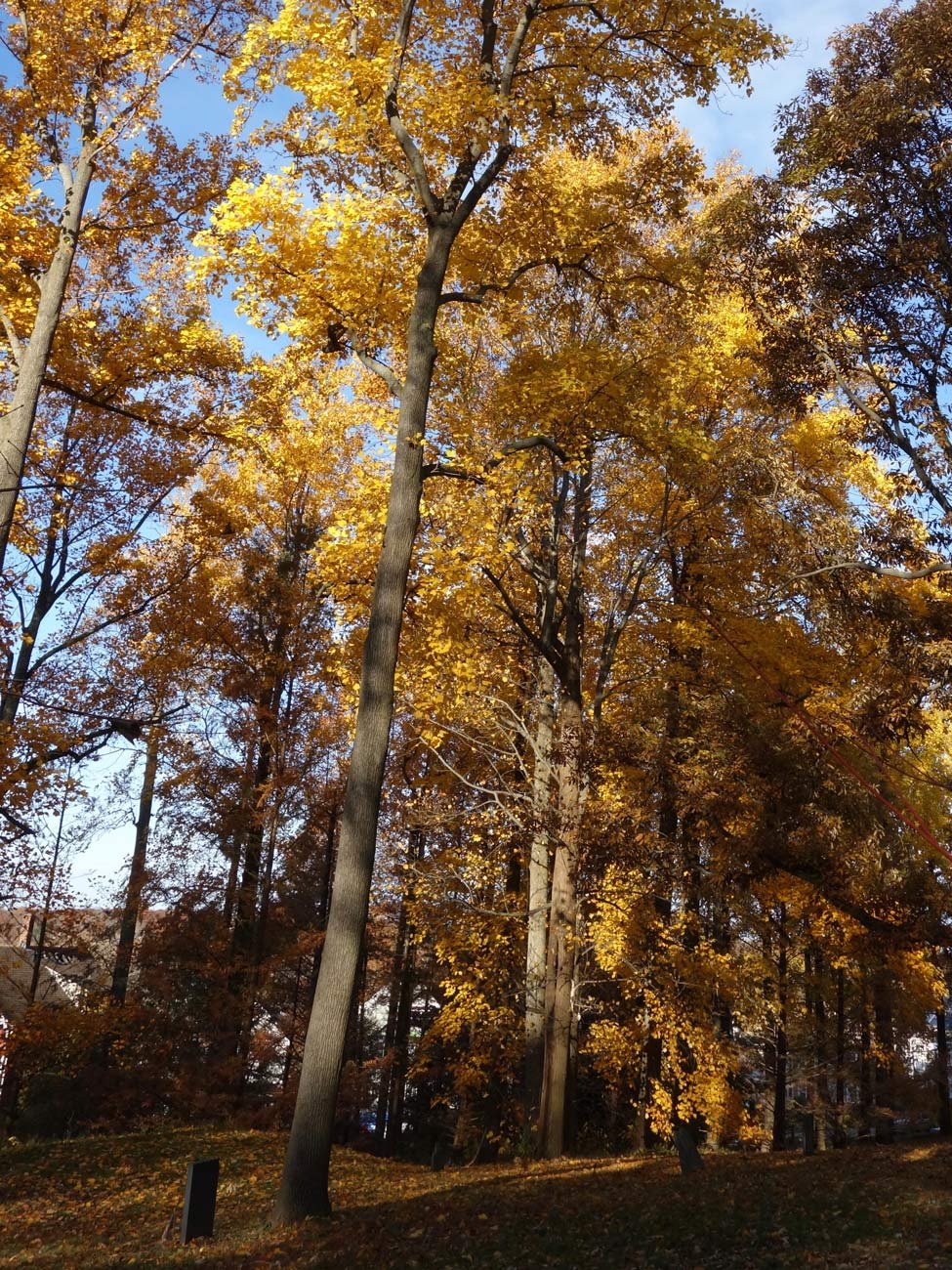 Tucked into the southwestern slope of Peters Hill, the Walter Street Burying Ground is a collection of several dozen headstones dating from the 1700s and 1800s. The site was established in 1706, when a group of colonial townspeople, tired of travelling more than three miles to their parish in Roxbury, built a meeting house with space for a burying ground. The oldest surviving stone is dated 1722, memorializing Anna Bridge. The parishioners took down the meeting house in 1773, but continued to use the burying ground into the 1800s. In 1867, the development of an area several miles away disturbed the remains of several Revolutionary War veterans. They were reinterred here, and, in 1903, commemorated with a memorial stone. In 1946, the Arboretum took over maintenance of the burying ground. The headstones now stand under a canopy of tulip trees, dawn redwoods, oaks, and dogwoods.

In the segment below, Head of the Library and Archives Lisa Pearson talks about the early history of this area.

My name is Lisa Pearson and I’m the Head of the Library and Archives at the Arnold Arboretum.

The town of Roxbury, as separate from Boston, was founded at the same time with settlers from Winthrop’s fleet. The nucleus of it was the area that is around Dudley Square today, or Nubian Square as it has been renamed. Very soon, though, settlers came out from that area—it’s about three miles or so out to Jamaica Plain, or what would become Jamaica Plain—and set up farms. Some of the early settlers here were the Weld family. The area that is Peters Hill today was actually owned by the Weld family at that time. There got to be a nucleus of families living here, and it became onerous for them to make the journey back into the center of Roxbury where the meeting house was. This was in the 1690s. They really were tired of traveling three and a half, four miles every Sunday, or other times when they needed to meet as a town all the way back into the center of Roxbury.

So they had petitioned the General Court to try to get a meeting house set up here, in the area that became known as the “Jamaica end” of Roxbury—Jamaica Plain, later on. This was turned down by the General Court, probably one of the reasons being that it would have meant that they would have had to have paid for another minister, as well as the minister that was at the church in the center of Roxbury. So it was turned down, and I think that this made the families here a little bit disgruntled, and they in 1710, -12, -11, -12 (around in there), took matters into their own hands and built a meeting house.

And of course, when the powers that be found out that they had built a meeting house, everyone was up in arms. The families were reprimanded and they sent a letter saying, “Oh dear, dear, we don’t know what came over us. We’re so sorry that we built this meeting house. Oh, but we’re not going to necessarily take it down.” Or, that was the subtext of the letter. Finally, the powers that be came around and saw that they did need to have a meeting house here, and it was allowed to stand and a minister was appointed. And that meeting house stood here for a number of years afterward.

In addition to the meeting house that was built on Walter Street, there was also a burying ground, because the local families needed to bury their dead, as that happened. And that burying ground stretched out up from Walter Street up the hill, and was filled with, in the 19th century, about 150 marked burials. There were probably a number more. The burying ground stayed after the church was disassembled and moved to West Roxbury in the later 18th century, and continued to accept burials well into the 19th century.

In the late 19th and very early 20th centuries, work was done on Walter Street—Centre Street and Walter Street, there were road improvements done in that area. And as part of that, Walter Street was widened and straightened somewhat. At that time, as part of that widening, it cut into the front part of the burying ground. And I have not actually found exact numbers, but there were some burials that were disturbed. And again, according to somewhat hearsay, those burials may possibly… the remains may possibly have been reinterred in our burying ground at the Walter Street or they may have been reinterred over at the Mount Hope Cemetery, which is a short distance away.

The Walter Street Burying Ground came under the care of the Arnold Arboretum in the 1920s. At that time there was still a stone wall around the grounds. But then later on, in the, I believe, 1950s, we received permission to remove that wall and that land was incorporated as flowing into the Arboretum property on Peters Hill. The burials, of course, remain, and there are still some that are marked with 18th century stones. Quite beautiful stones.