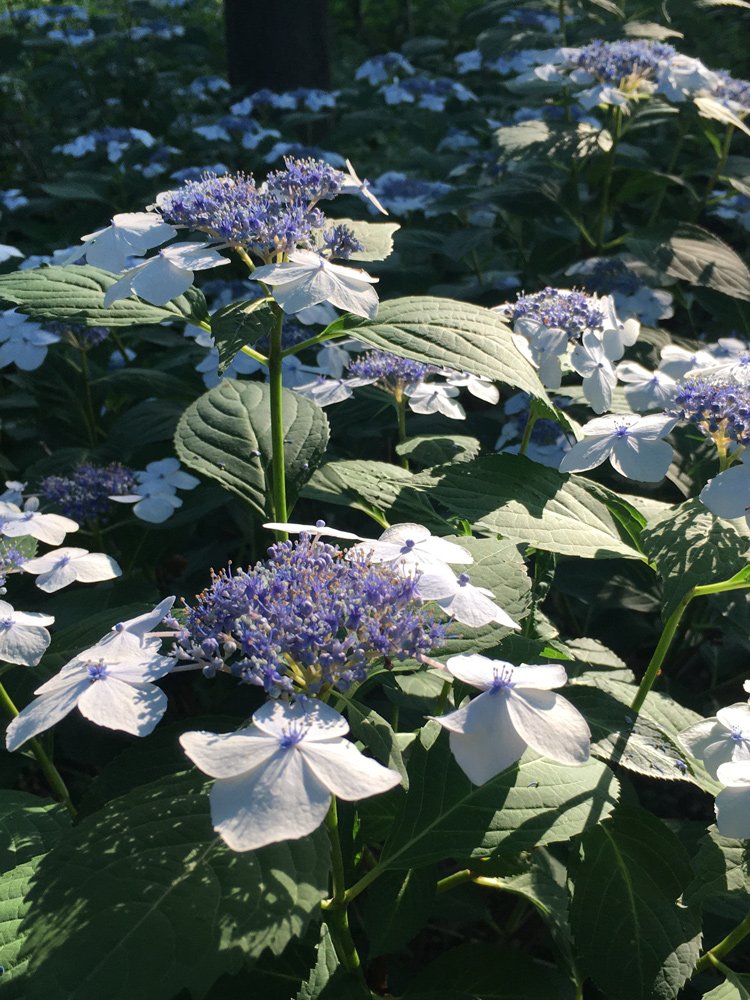 This stop is excerpted from Planting Edo, a field guide created in partnership with the Harvard Art Museums. The guide pairs Arboretum specimens with paintings from the Museums' exhibition Painting Edo: Japanese Art from the Feinberg Collection.

In Japan, hydrangeas are associated with the lunar fifth month and the rainy season at the beginning of summer. Hydrangea blossoms have clusters of smaller flowers with four or five triangular petals and usually showier sepals (whorled organs of the flower that arise below the petals). In this species, the color of these flowers will vary depending on the acidity of the soil any given year. Pink hydrangeas indicate more alkaline soil, while blue hydrangeas appear in more acidic soil.

Hydrangeas produce two types of flowers on each plant—fertile and sterile—and Edo period paintings carefully depict both types. Fertile flowers, rendered here in Birds and Flowers of the Twelve Months by Sakai Hōitsu (1761–1828) as small blue dots, are ready to be pollinated, while sterile flowers are designed to attract insects with their more prominent petals.

Two paintings included in the Painting Edo exhibition may document a shift in the cultivation of hydrangeas in Japan: while an earlier screen painting depicts lace cap hydrangeas, which have lots of small fertile flowers surrounded by a ring of sterile ones; this later painting prominently features the more aesthetically pleasing mop-headed clusters of infertile flowers. This is perhaps evidence of horticultural selection to please changing tastes in domestic gardens during the Edo period in Japan.